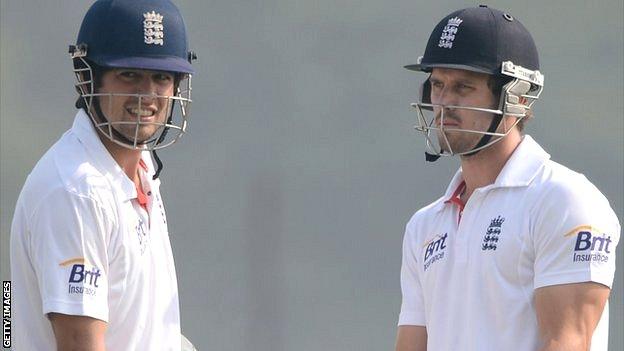 England captain Alastair Cook has given fellow opener Nick Compton a vote of confidence going into the first Test against New Zealand on Wednesday.

Compton averages 34.66 after his only Test series so far and, despite doubts over his place against the Kiwis, Cook has faith in the 29-year-old.

"I'd just love to see him get in and get that one big score which will get him up and running," said Cook, 28.

"He's definitely got the class to do that at international level."

"My view is that Compton deserves to keep hold of the opener's role and build on the promise he showed in India. The subcontinent is one of the hardest places to open the batting because you come up against spin bowling very early on in your innings but I really like what I have seen from Compton, both from a mental and technical point of view."

Compton has replaced the retired Andrew Strauss as Cook's partner at the top of the order and the Somerset batsman's top score in eight innings in the recent Test series victory in India was 57.

However, he did figure in stands of 123, 66, an unbroken 58, and 165 with his captain, and showed he could occupy the crease for long periods, with his 57 taking three and a half hours to compile.

"The starts we got there, in different conditions to what he's used to, show he can adapt his game to international cricket," said Cook.

"I think he'd be the first to admit he got those starts without kicking on.

"One of his great strengths, when he plays for Somerset, and the reason he forced his way into this England side, was that when he got in he went big.

"It was slightly unusual that didn't happen in India, but I've got no concerns about that, because that's why he got picked.

"He's got the ability to get in and score big hundreds.

"There will be no one trying any more desperately to do that than Nick, and I think he's got every attribute to do well."

Joe Root, 22, scored 73 and 20 not out in the fourth and final Test in India before impressing in the one-day international series against the same opponents.

There have been calls for him to be pushed up the order to open with Cook but the Yorkshire player is set to stay at number six for the first Test.

England's match against New Zealand will be the start of 15 Tests in 12 months, including back-to-back Ashes series against Australia, and first-choice spinner Graeme Swann has aired concerns over his elbow.

"We are embarking on arguably England's greatest year of Test cricket ever and I can't wait for the back-to-back Ashes series. But I have one big worry - the state of my right elbow," Swann wrote in his column in The Sun.

"I'll be honest, the elbow is always a concern. It's been hanging over me for several years and, despite having an operation in 2009, the problem hasn't entirely gone away.

"It would be a massive pain in the backside if my wonky elbow forced me to miss any of the Tests against Australia. I'm absolutely determined to be available for what might be my final two Ashes series - and that means managing the elbow as well as possible."