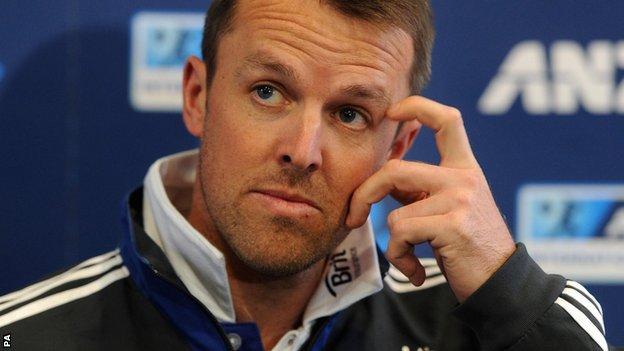 England spinner Graeme Swann says he is confident of being fit for this summer's Ashes series against Australia after being ruled out of the Test tour in New Zealand with an elbow injury.

He will have surgery in the United States next week after a scan revealed he needed some floating bone removed.

It will probably mean I never will play in a Test match in New Zealand, so I'm peeved to be honest

"The Ashes are four months away, so if I'm not fit by then I will be very surprised," he told BBC Radio 5 live.

England begin the defence of the Ashes on 10 July at Trent Bridge.

Swann was told he needed surgery after having a scan in Dunedin ahead of the first Test against New Zealand.

"The last operation I had was by the same guy and he's a genius in the field," said the 33-year-old Nottinghamshire off-spinner, who has been dogged by elbow problems.

"I'm very buoyed by the success of that last operation and I know it will be fine. I'm just peeved at the minute because I've been looking forward to this New Zealand series for ages.

"It will probably mean I never play in a Test match in New Zealand, so I'm peeved to be honest."

Swann said he will "follow the instructions to the letter" following surgery in an attempt to recover in time for the first of five Tests against Australia.

An England & Wales Cricket Board statement read: "Swann will travel to the United States next week to have an operation and will then undergo a period of rehabilitation allowing an anticipated return to competitive cricket in the early summer."

Before his injury setback, Swann had missed only three of England's 53 Tests since his debut in India in December 2008.

He was rested for the one-day international series in India before Christmas, but played in the three ODIs against New Zealand last month.

However, he complained of stiffness during the defeat by a New Zealand XI in the four-day warm-up match.

Swann was replaced by slow left-armer Monty Panesar for the first Test in Dunedin, the first day of which was washed out.

Kent's James Tredwell, another off-spinner, is also flying out to New Zealand to boost the touring squad.

England play three Tests against New Zealand, with matches in Wellington and Auckland following the one in Dunedin.