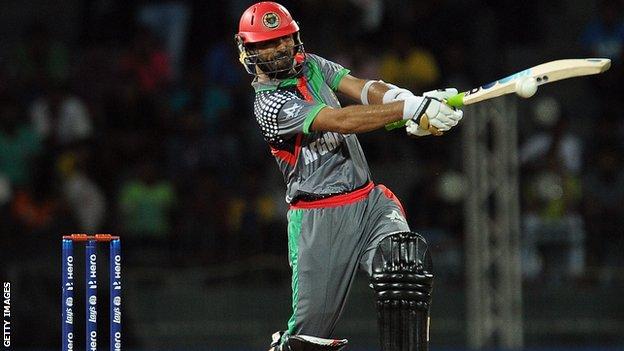 Scotland suffered a seven-wicket defeat by Afghanistan in a one-day World Cup qualification match in Sharjah.

Nawroz Mangal's unbeaten 112 proved decisive as the Afghans reached their target in the 34th over.

But the Afghans got off to a strong start and the impressive Mangal hit six sixes to take control of the game.

Scotland remain second in the table behind Ireland on 11 points but the Netherlands and UAE now have a game in hand and are just one point behind, while Afghanistan have nine.

The top two nations automatically qualify for the 2015 World Cup.

With Scotland bowling far too many short balls on a flat track, Afghanistan lost just three wickets on their way to a comfortable victory.

Samiullah Shenwari finished on 55 not out, supporting the explosive hitting of opener Mangal.

Scotland's run rate of less than four an over was disappointing, with the boundary breached on just 15 occasions.

Matt Machan managed 44 but when he and Berrington fell in the space of two balls, the Scots could not muster the kind of finish required for a challenging total.

Scotland meet Afghanistan in Sharjah again on Friday in the same tournament.