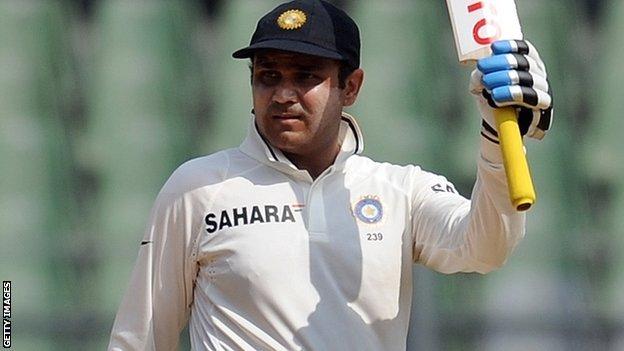 India have dropped veteran opener Virender Sehwag for the two remaining Tests of their series with Australia.

The hard-hitting 34-year-old has scored nought, two, 39 and six in his last four Test innings.

India lead the four-match series 2-0 after their innings victory in Hyderabad on Tuesday.

Sehwag tweeted: "Will continue to work hard for my place in the team. I trust my game and am confident that, 'I'll be back.' Best wishes to the team."

His 219 from 149 balls against West Indies remains a world record score in one-day international cricket.

But his career appeared to be on the decline after he was dropped for the ODI series against England in January,

While he scored a century in the first Test against England in November, he failed to pass 50 in the rest of that series, and his fielding also came under criticism.

His regular opening partner Gautam Gambhir was dropped for the Australia series, but Sehwag's three opening stands with Gambhir's replacement Murali Vijay in the first two Tests were worth 11, 16 and 17.

Vijay will now be partnered by either Rahane and Dhawan, who are uncapped at Test level, although both have appeared for India in one-day and Twenty20 internationals.

Right-hander Rahane, 24, from Mumbai, was in the Test squad for the series against England in November and December, frequently appearing as a substitute fielder, while Dhawan, 27, is a Delhi-born left-hander.

The third Test starts in Mohali on 14 March, with the fourth in Delhi eight days later.