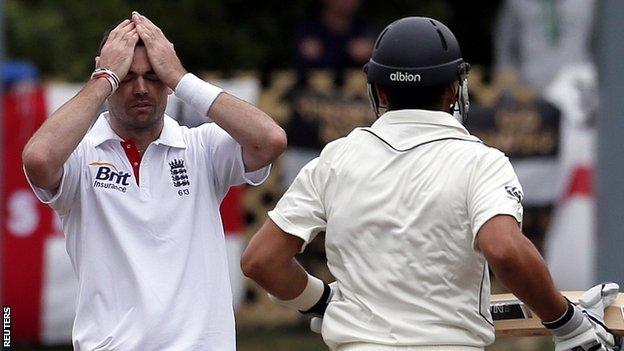 Fast bowler James Anderson says England face an uphill task to save the first Test against New Zealand after a second successive day of toil in Dunedin.

"Our job now is to get three wickets and then we have to bat as long as we can to get ourselves into a safe position in the game," said Anderson.

"It will be pretty difficult I would imagine."

Anderson was the pick of England's bowlers with four wickets as the tourists improved on a dismal showing on the second day, when they were bowled out for 167 before failing to take a wicket in 42 overs.

"New Zealand are still very well placed to win the match. England have got an awful amount of batting to do if they are to avoid defeat. Behind by 235 with half-hour earlier starts on the fourth and fifth days, they are absolutely up against it."

He removed Peter Fulton for 55 early on and claimed three wickets with the new ball after lunch, including debutant Hamish Rutherford for a magnificent 171.

His other victims Ross Taylor and Dean Brownlie received fiery send-offs as Anderson struggled to contain his obvious frustration at England's overall predicament.

"It can build up sometimes, especially when you are disappointed to get such a low score and we have had to toil for the wickets today," he added.

"Sometimes the frustration comes out in different ways. When you have got such a hard job to do and you are trying to bowl the opposition out emotions play a big part in it."

New Zealand may choose to declare overnight, or extend their lead still further before England embark on their second innings. Either way, Anderson says he has not seen anything in the wicket to concern the England batsmen.

"There has not been too much in the way of seam or spin," he added.

"There were some signs of the ball going through a bit lower but I don't think there are any demons in the pitch we have to worry about if and when we come to bat in our second innings."