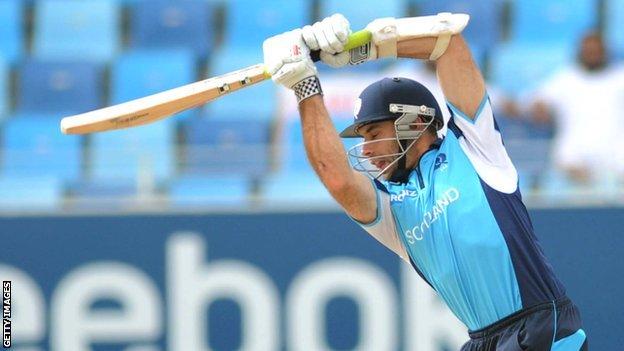 Scotland have lost to Afghanistan for the second time in three days in the World Cricket League Championship.

The result means Afghanistan draw level with Scotland in second place in the league table.

Having already beaten Scotland in two T20 fixtures in Sharjah, Afghanistan have now completed a short-form clean sweep against the Scots.

The two sides face each other next in a three-day Intercontinental Cup clash in Abu Dhabi on 12-15 March.

Scotland batted first, but despite Kyle Coetzer's impressive 133 from 136 balls and a 64 from Josh Davey, the remainder of the innings failed to beat the extras total of 14.

And this proved the difference between the sides, with every Afghan batsmen hitting over 20 as they beat Scotland's total of 259 by five wickets, with eight balls to spare.

The top two teams in the league qualify automatically for the 2015 World Cup, with the rest going into a qualifying tournament next year.