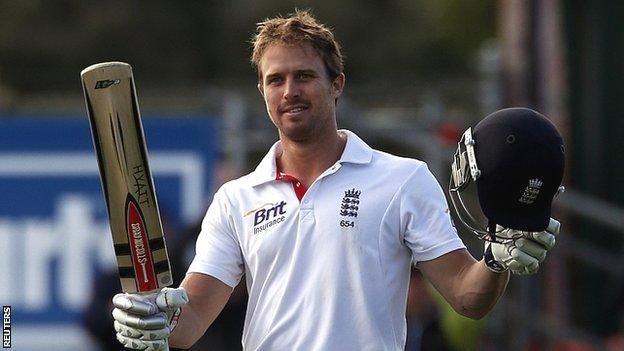 England batsman Nick Compton said he was relieved to have silenced his doubters with a maiden Test century.

Compton scored an unbeaten 102, sharing an opening stand of 231 with Alastair Cook, as England fought back to within 59 runs of New Zealand in Dunedin.

"After getting nought in the first innings I had to pull something out of the bag," the Somerset player said.

"I never thought I would be standing here with a hundred to my name. It's the biggest relief of my life."

"For Compton - on a pair, and with all the speculation about his future in the side - to go out there and hit a hundred says everything about his temperament and determination, and his character and composure."

The 29-year-old added: "I was really staring down the barrel and there was a bit of pressure on me, but I suppose it just shows what you can do if you get your head down and don't look too far ahead."

Compton came into the series amid calls that he be dropped after a highest score of 57 in his eight previous Test innings and two failures in England's only warm-up match on this tour.

He was dismissed for a duck in the first innings in Dunedin and came out to bat in the second with England 293 behind after New Zealand scored 460-9 declared in reply to England's 167.

But, alongside Cook, he dragged the tourists back towards parity as they put on England's highest opening partnership against New Zealand.

Cook was dismissed for 116 three overs before the close but Compton, after spending 50 minutes in the 90s, held his nerve to bring up his century with a single two balls later.

"The 90s were horrible," he admitted. "It was probably one of the worst hours, and it felt like two hours.

"Nick Compton came into this match with questions about his Test future hanging over him and he has had a great day. When you have lows you're entitled to highs and today is his day - he can go home and rejoice. It is one of the most memorable days of his life."

"But the bigger picture was the game and I wanted to make sure I kept my eye on the ball.

"It would have been easy to try to run down and have a flap at the spinner before the new ball but I thought it was important that I stayed here.

"I never thought a year ago or [even] a couple of months ago I'd be sitting here right now with a hundred.

"I kept believing, but it's been a long time. It's a strange feeling but I'm just delighted to be here.

"You just know instinctively what you need to do, and I felt like this innings was very important."

Cook's hundred was his 24th in Tests and his sixth in seven matches as captain, prompting Compton to describe his skipper as "a special guy".

"He had a phenomenal tour in India and he's switched back on out here," said Compton. "His record speaks for itself; he's just a run machine and he keeps going."

Thanks to their openers, England are now primed to salvage a draw and ensure they go to next week's second Test in Wellington on level terms.

But Compton knows there is still work to do on the final day.

"We've got another day to go and they are going to come hard at us, but we've just got to try to do a bit of what we did today," he said.