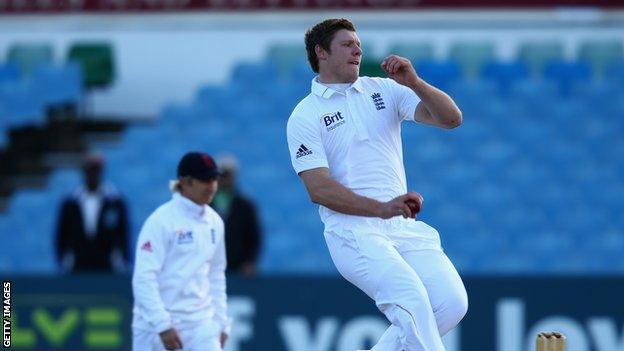 Kent coach Jimmy Adams has backed pace-bowler Matt Coles to return to the England setup, after being sent home from the Lions tour to Australia.

"He knows he's let himself and the club down," Adams told BBC Radio Kent.

"We would like to focus on how to get him ready for the season and ensure that if and when the opportunity arises, he makes better decisions."

As long as he performs well, I don't see any reason why he can't (play for England)

Having spent last winter on the England and Wales Cricket Board's Strength and Conditioning Programme, Coles struck his maiden first-class century in 2012, and ended the season as Kent's leading wicket-taker in all competitions.

He took two wickets on his England Lions debut in May, and retained his spot for the tour of Australia.

But while on the winter tour, ECB performance director David Parsons said Coles and Stokes "ignored the instructions given to them around their match preparation and recovery".

However, Adams believes Coles still has a future at international level, and promised to support him in achieving that goal.

"The main thing is an awareness from Matt that he represents far more than himself," said the former West Indies international.

"He will only get better as a player. He's now a lot wiser for his experiences.

"As long as he performs well, I don't see any reason why he can't (play for England). He might need to convince a few people that he's capable of making good decisions but sometimes that's the penalty you pay.