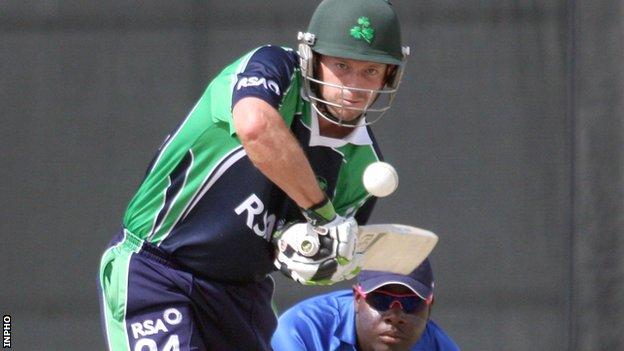 Joyce helped the Irish to 272-2 on the opening day in Sharjah after the UAE won the toss and decided to field.

An opening partnership of 126 between William Porterfield (82) and Paul Stirling (61) set the foundations for a big total in the four-day encounter.

Joyce needed just 120 balls to move one short of the century while Niall O'Brien is 24 not out.

Joyce said he would not go out nervous on Wednesday morning after being stranded on 99.

He added: "I'm not nervous at all. I've never been 99 not out overnight before, but I'm just happy to have scored 99 - if I was to get that score every time I would take it.

"It's a slow and low wicket so if you stay in your crease it can be difficult to score.

"The lads had given us a great start so I made the conscious decision to try and score about a strike rate of 70, use my feet a bit and maybe take a few more risks than the others.

"I was a bit more attacking and that helped on that wicket."

Porterfield was bowled by Mohammad Naveed while Stirling was out lbw to Ahmed Raza.

Ireland are seeking their fourth Intercontinental Cup success with their first win coming in 2005.

The Irish top the Intercontinental Cup table with 67 points from four games, ahead of Scotland (46), Afghanistan (44) and Namibia (43). UAE are in sixth place on 30 points.

There are also two World Cricket League games against the UAE next week, with Ireland again at the summit after four rounds.

Scotland are currently second and the top two will qualify automatically for the 2015 World Cup.