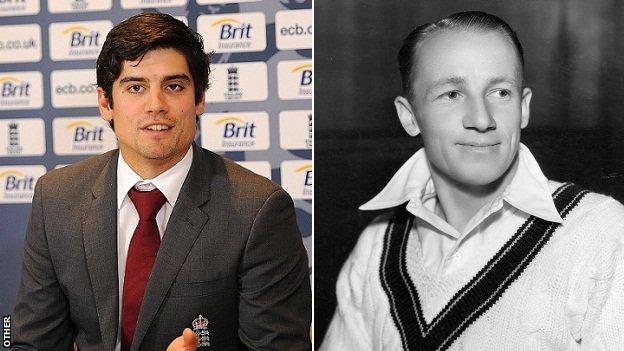 Known as The Don, he only failed to average 100 for his Test career when he was out for a duck in his final innings

Cook is 40th on the averages list, between Pakistan's Inzamam-ul-Haq and England's Denis Compton.

"Where he is at in his career at the moment, he is as good as anyone who has ever played the game, barring Bradman," said McCullum.

"He's obviously a genius batsman, his record is testament to that."

He became his country's all-time record centurion and the youngest batsman of any nationality to pass 7,000 runs when he hit his 23rd ton in the third Test against India in December.

New Zealand face England in the second Test of the three-match series in Wellington on Thursday (late Wednesday in the UK), and McCullum admits Cook will be the prize wicket for his bowlers.

"We just have to bowl areas where we think we can dismiss him and if he's good enough to overcome that then so be it," McCullum said.

Only 39 players in Test history averaged more than 50.

Alastair Cook is ranked joint-40th with his average of 49.60

Source: ESPN Cricinfo. Players must have batted in a minimum of 20 innings to qualify

New Zealand bowlers Tim Southee, Neil Wagner, Trent Boult and Bruce Martin were impressive in the drawn first Test in Dunedin, dismissing England for 167 in the first innings and taking six wickets in the second on a flat, lifeless pitch.

The Wellington wicket is likely to offer far more pace and bounce than Dunedin, and McCullum said he is likely to ask England to bat first should he win the toss.

"Modern pitches do not tend to deteriorate, and if there is any advantage, it is usually on the first day, so I am inclined at the moment to look to bowl first," he said.

Cook thinks the conditions at Basin Reserve will prove testing for his seam attack of Jimmy Anderson, Steve Finn and Stuart Broad.

"The wind will blow here, and it is a challenge for the bowlers. It is a balancing act, bowling into the wind, at one end, and ensuring that we do not go soft at the other," he told BBC Test Match Special.

Both sides are expected to name the same starting side that played in Dunedin, and Cook is confident that there will be no repeat of their first innings.

"We have held our hands up here a number of times about that first innings. It was a blip," he said.