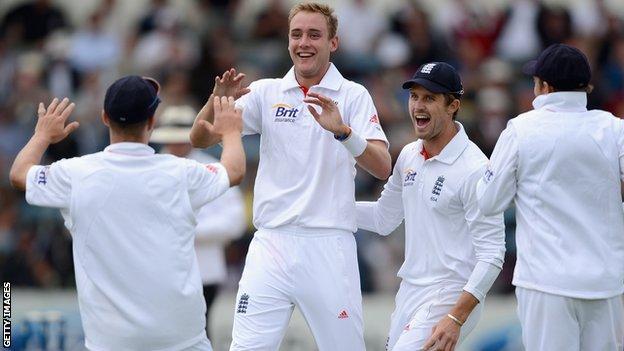 He removed Hamish Rutherford and Ross Taylor as the hosts stuttered to 66-3 by the close of day two in Wellington - trailing by a distant 399.

England had converted their overnight 267-2 into an imposing 465, their highest total at the Basin Reserve.

Jonathan Trott failed to add to his 121, but Kevin Pietersen made 73 and Matt Prior a sparkling 82 off 99 balls.

"New Zealand look like a team that could roll over if England get them on the back foot. With Taylor and Rutherford out, England will fancy their chances of winning this game - and so do I. They will have to work hard to get there - but they need a contribution from Panesar."

Bruce Martin finished with 4-130 from 48 overs, while Kane Williamson took the final two wickets in an over to finish with 2-16.

Prior had led a valuable lower-order rally, sharing an 83-run stand for the eighth wicket with Steven Finn (24) to ensure England averted the prospect of wasting the good work of Trott and fellow centurion Nick Compton the previous day.

The wicketkeeper batted with typical aggression during an entertaining afternoon session that saw 112 runs and six wickets, four of which fell to spin.

The importance of his contribution was underlined when James Anderson had Peter Fulton, who laboured for 24 balls in making one, caught by Alastair Cook at first slip in the seventh over of New Zealand's reply.

But Broad's blows were key. After withstanding a hostile new-ball burst from Finn, Rutherford edged a drive to Cook to depart for 23, before a leaden-footed Taylor was cleaned up first ball by one that held its line.

Having battled hard to restrict England's batsmen on a surface that remains reliable, New Zealand's plight suddenly became perilous, and the follow-on target of 266 will be their most pressing concern when play resumes on the third day.

The Kiwis had enjoyed the better of the morning session, which began with the wicket of Trott to the first ball he faced, angled across him sufficiently by Trent Boult to find a faint outside edge.

Pietersen had begun in much the same watchful fashion as the previous evening, with the exception of a towering straight six to greet Martin's introduction into the attack.

Dropped on 40 by a leaping BJ Watling when he top-edged an attempted pull off Tim Southee, Pietersen compiled a 112-ball half-century that reflected his continuing search for fluency.

By that time, Ian Bell, on the charge, had skied an uncharacteristic drive to Fulton, who made good ground to his left at mid-off to take a fine catch.

Joe Root was equally culpable in chasing one that Martin tossed up outside off stump. Watling held the edge.

Martin was again the beneficiary of an ill-advised stroke when Pietersen holed out at deep mid-off, and Broad edged Boult behind seven balls later to leave England 374-7 and in danger of being accused of wasting the excellent platform that had been built on day one.

"Matt Prior played beautifully. He was plucky and punchy, off the back foot and the front foot. He got England moving and up towards a good total.

"It's still a pretty good pitch, and if England can get Brendon McCullum, their danger man, New Zealand will be in trouble."

Cue Prior's counter-attack. For all his batting exploits in the drawn first Test in Dunedin, Finn's arrival persuaded Prior to launch an offensive.

He celebrated a 77-ball fifty with the sort of booming cover drive which has become his trademark, then thumped left-arm seamer Neil Wagner back over his head for six in successive overs.

Finn had managed a clutch of meaty blows himself when, having accompanied Prior for almost 20 overs, he drove Wagner tamely to short extra-cover.

It was the first of three wickets to fall in the space of 11 balls as Prior reverse-swept to Wagner at backward point and Monty Panesar edged to slip.