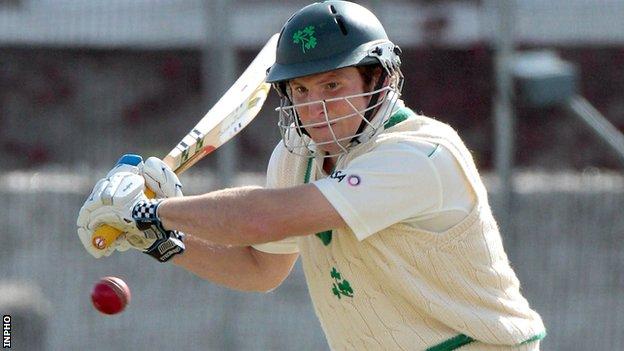 Alex Cusack and Paul Stirling each took three wickets as the hosts were bowled out for 165 in 46.4 overs.

Ireland were 31-0 but lost four wickets for just 20 runs before Wilson's impressive knock took the tourists to 169-5 in 42 overs.

Ireland are now four points clear at the top of the World Cricket League.

The top two from the league will qualify automatically for the 2015 World Cup.

Ireland won the toss on Monday morning and decided to field and Dockrell claimed the first wicket with the UAE total on five.

UAE reached 38-1 before the Irish took three wickets for one run, and a modest 165 was posted with Swapnil Patil (65) the top scorer.

Ireland were struggling on 51-4 when Surrey wicket-keeper batsman Wilson steadied the innings and with help from Niall O'Brien (18) and Mooney (23 n.o.) he guided the tourists to victory.

The teams meet again in the World Cricket League in Sharjah on Wednesday.

"That's a big step and if we can get another win on Wednesday then we're very close to qualification for Australia."