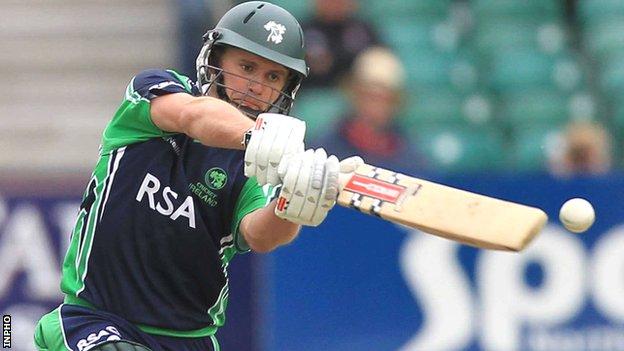 Ireland moved six points clear at the top of the World Cricket League after a six-wicket victory over United Arab Emirates on Wednesday.

The Irish followed up Monday's five-wicket success with another comfortable win in Sharjah.

Trent Johnston took wickets while Alex Cusack and John Mooney claimed two apiece as UAE were bowled out for 196.

Ireland cruised to 199-4 in 47.4 overs with William Porterfield hitting 77 while Gary Wilson added an unbeaten 39.

The tourists elected to field after winning the toss and they made a good start, reducing UAE to 8-2.

Wickets fell steadily with Shaiman Anwar (39) top scoring while Johnston removed four of the top five batsmen to finish with 4-25.

Opener Paul Stirling was out for 13 and UAE were given a glimmer of hope when Porterfied was removed for 77 from 104 balls to leave the Irish on 138-4.

But Wilson and Kevin O'Brien (25 not out) cruised to the victory target and brought Ireland closer to qualification for the 2015 World Cup.

There are four rounds remaining and Ireland's impressive run-rate means that one win in their double-header fixtures against the Netherlands in July, or Scotland two months later, would see them on the plane to Australia.

Johnston was delighted with his own form and that of the team as they took one step nearer to automatic qualification.

"It was a great performance and fantastic to get four points," he said.

"It was very hard to come here and get two wins from these guys. They were unbeaten in four games at home,

"We probably have one foot on the plane to Australia. We haven't spoken about it yet but Phil Simmons (Ireland coach) will want us to go out and win those four remaining games and finish on 25 points - that's our goal."