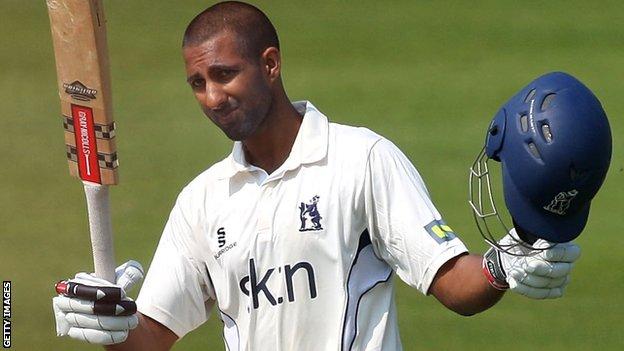 County champions Warwickshire signalled their intention to mount a strong defence of their title with a dominant batting display against the MCC.

Varun Chopra and Will Porterfield made centuries on day one in Abu Dhabi after the loss of Ian Westwood for a duck.

They shared a stand of 308, with Chopra hitting three sixes and 20 fours in his 163 before falling to Simon Kerrigan.

Chris Rushworth dismissed Porterfield for 162 shortly before the close, which Warwickshire reached on 370-3.

Playing under the floodlights with the pink ball was fine

Played as a day-night game, the start of the traditional county season curtain-raiser proved hard going for the MCC attack despite the bonus of Westwood's wicket in the second over, when he was caught by Kerrigan off Somerset all-rounder Peter Trego.

They had to wait 76 overs for their next success, with their only semblance of a chance coming when Chopra attempted to sweep James Middlebrook immediately after reaching his half century and the ball just eluded leg-slip.

The 25-year-old went on to reach his 11th first-class hundred off 165 balls, three more than his left-handed partner, but finally departed when he drilled a ball from spinner Kerrigan to Steve Kirby at mid-off.

"It was a great start to the season for me, the wicket was good, and we made the most of winning the toss on a decent deck. Playing under the floodlights and with the pink ball was fine," said Chopra

"Having two set batsmen definitely helped, especially during the twilight period, which can be a challenge, but I really enjoyed it out there."

Ireland captain Porterfield accelerated with his partner gone, collecting a six and 22 fours in total, before his five-hour plus innings was ended by Rushworth, with the help of Kerrigan's second catch of the day.

His departure gave Warwickshire skipper Jim Troughton a few overs to play himself in, and he was eight not out at the close, with Laurie Evans on 15.

"Warwickshire are used to seeing Varun Chopra in good early season form, but the performance of William Porterfield will be especially encouraging.

"Chopra has made big scores at the start of each of the last two seasons and after a shaky start, looked completely assured on his way to 163. The anger he displayed at getting out when he did indicated that he saw it as a missed opportunity to make another double hundred.

"Porterfield, in contrast, has contributed important innings in his two years at Warwickshire, but has failed to go on to big scores. This was his maiden first-class century for the Bears and follows an impressive run of scores for his country.

"If the Ireland captain can take this form into the start of the County Championship it bodes well for the defence of the crown.

"As for the pink ball with white clothing played under lights, the two batsmen clearly had few difficulties picking it up."