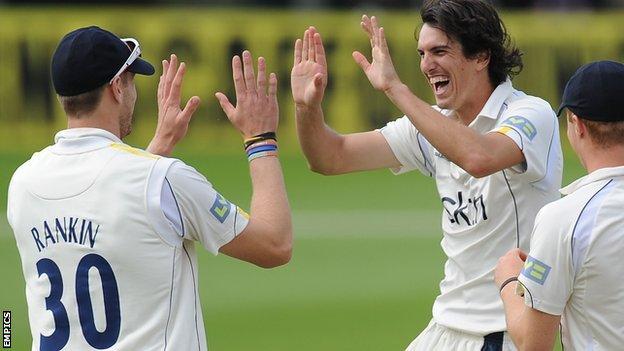 The county cricket season starts on 10 April and the BBC Sport website will broadcast live commentary of every match under a new deal with the ECB.

The agreement covers all games in both divisions of the LV County Championship and the FL t20 and YB40 competitions.

The commentaries will stream online, but there will also be increased coverage on Radio 5 live sports extra.

"There is a big appetite for county cricket coverage," said head of radio sport and sports news Richard Burgess.

"This broadcast partnership between the BBC and the ECB means that the entire season will now be available to audiences.

"The BBC has a long-standing commitment to cricket commentary, and this is a great opportunity to further raise the profile of the sport and promote the game at county level through BBC Sport's multi-platform capabilities."

The new agreement comes into force for the opening day of the County Championship on 10 April.

As in previous years, there will be regularly updated scorecards for every game on the BBC site, which will also carry the latest news and local radio interviews from around the county circuit.

He added: "With a new domestic playing schedule due to start in 2014, we are keen to promote the county game to the widest possible audience and are delighted that the BBC will be providing such comprehensive coverage of all our county competitions, and seeking to recruit a new generation of broadcasting talent.

"This is great news for all followers of county cricket nationwide, and for the 18 first-class counties who will undoubtedly benefit from wider levels of media exposure."