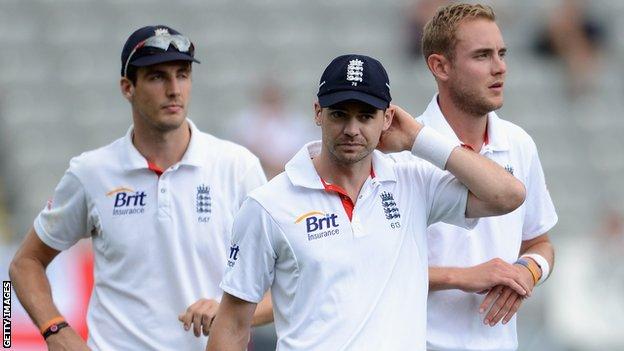 Steven Finn says England were happy with their bowling display on a flat wicket despite New Zealand finishing day one of the third Test on 250-1.

Finn took the only wicket of the day when Hamish Rutherford slashed to Alastair Cook at first slip, with Peter Fulton (124 not out) and Kane Williamson (83no) piling on the runs.

"One wicket wasn't ideal but they haven't got away from us," said Finn.

To bowl or not to bowl?

Former England opener Geoffrey Boycott: "I don't know why you would want to field first, possibly for two days, before you have a bat. There was nothing in the pitch, there has been no reverse swing and no spin for Monty."

Former England captain Michael Vaughan: "I would have done the same as Alastair Cook at the toss earlier, but the fact is I'd have been wrong as well."

Former New Zealand captain Jeremy Coney: "I'm loathe to blame Alastair Cook for putting New Zealand into bat first. All the signs were there that the pitch would assist the fast bowlers. However, it hasn't turned out that way."

"If we can get quick wickets tomorrow, we will be in a good position."

On a lifeless Auckland pitch, England, who won the toss and chose to field first, struggled to create opportunities as Fulton, with a maiden Test century, and Williamson shared an unbroken second-wicket stand of 171.

However, the tourists kept the run rate down, with the Kiwis scoring at less than three an over throughout the day.

"When we looked at the wicket this morning there was a lot of green grass on it," said Finn. "But it hasn't done as much as we thought it would.

"It's good that we didn't go chasing the game too much and leak boundaries. We stuck to our guns really well.

"As we have done in the past, we have to find a way on flat wickets."

It was a memorable day for Fulton, 34, who finally scored his maiden ton seven years after making his Test debut. His unbeaten 124 came off 277 balls and contained 15 fours and three sixes.

"I've played a few Tests now and haven't been able to get a century," Fulton said. "I guess if I'm being brutally honest at the start of this season I thought maybe my time had come and gone.

"So to get that Test 100 and cross that off the list is a great feeling."

Both sides are seeking a victory that would ensure a series win after the first two matches in Dunedin and Wellington ended in rain-affected draws.