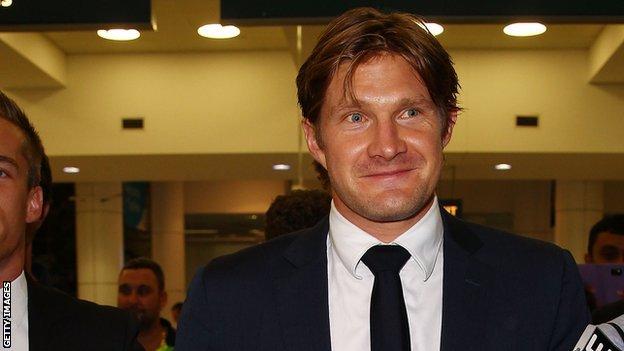 Australia all-rounder Shane Watson has returned to the side as captain for the fourth Test against India, with regular skipper Michael Clarke out injured.

The vice-captain was among four players dropped for the third Test after failing to provide a presentation to coach Mickey Arthur on team strategy.

The Test, which started on Friday, is Watson's first as skipper.

"It is really a dream come true to be asked to captain your country," said the 31-year-old.

"I've captained some one-day internationals, but to be asked to captain a Test [is] the ultimate honour."

Second Test: Hyderabad, India won by an innings and 135 runs

Watson, who was named vice-captain in 2011, had said he was considering his Test future after his omission from the side left him "absolutely shattered".

"It's obviously very disappointing that Michael [Clarke] hasn't come up," he said.

"His batting and leadership will certainly be sorely missed, but I'm looking forward to the challenge and responsibility over the next five days."

After two heavy defeats to India, Arthur asked each member of his squad to produce, by email or in person, three ideas about how the team could improve.

But Watson - along with Mitchell Johnson, Usman Khawaja and James Pattinson - failed to respond.

Australia would go on to lose the third Test by six wickets to go 3-0 down in the series.

Cricket Australia insisted the decision to give Watson the captaincy in Clarke's absence was a simple one.

Selector Rod Marsh said: "The decision for Shane Watson to step in as captain was a very straightforward one for the selection panel.

"Shane is the vice-captain on this tour and, as a senior member of the group, is well credentialed to lead Australia in Michael's absence."