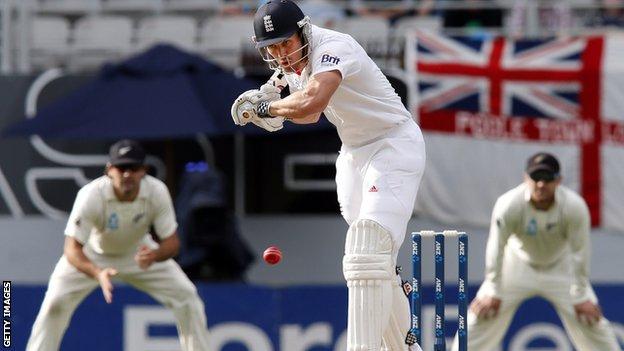 England must bat until lunchtime on the fourth day if they are seriously thinking about winning the final Test, and the series, in New Zealand.

If England can do that then they are in a position where they can still win the match. But they have to be level with New Zealand at that stage, with the hosts starting their second innings knowing they have to bat until lunchtime on the fifth day to be safe.

Knowing that does put a huge amount of pressure on to a team and I have seen countless Test matches where teams in that situation have folded under pressure.

"The game has moved forward a great deal, but the fact is England are still looking dodgy. They have got to score quite a few runs before avoiding the follow-on, and they have got two young kids in Joe Root and Jonny Bairstow coming in next. Root has had a couple of failures and Bairstow hasn't had a knock for weeks, so it's a lot of runs. England look vulnerable without Pietersen."

The worrying aspect for England is that they have not got a huge amount of batting to come.

Joe Root is in next and is not in great touch, while Jonny Bairstow's last first-class match was a Test in Mumbai in November. It is absurd that he has to play a Test match now after such little time at the crease.

But the Yorkshireman has to look at the situation positively and think, "I've got an unexpected opportunity here to go out and do something".

To take the wickets of captain Alastair Cook and Jonathan Trott, who along with Nick Compton are likely to occupy the crease, stick it out and be obdurate, was great for New Zealand in the final session of the second day.

Compton played OK, but I think the situation which England find themselves in - chasing the game - makes one nervous.

It was encouraging to see how England came out in the first session of the second day. They recognised how poorly they played on the opening day and came out more motivated.

The body language of the whole team was much better and they looked like how you would expect them to behave in a Test match. Unfortunately that was missing on the opening day.

It was a great day's Test cricket because it was ebbing one way and then the other. For a neutral spectator you couldn't have asked for more.

England pace bowler Steven Finn ran in hard but, if he's honest, was flattered by figures of 6-125 which equalled his Test best. At least he was in a fit state to be bowling in the late stages of the innings when James Anderson looked completely jiggered and Stuart Broad looked ineffective.

He was helped by Matt Prior, who was brilliant in taking five catches for the fifth time in a single Test innings. As far as I'm concerned he is the best wicketkeeper-batsman in the world.

New Zealand are firmly in control of the game and that is the disappointment for England. I'm not going to write them off - but if they are to win the Test, and the series, they will have to do it the hard way.