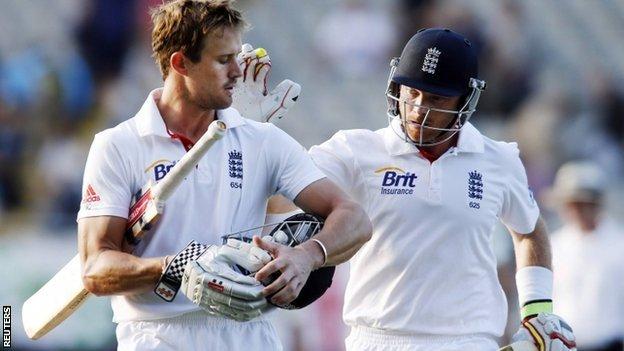 England's batsmen will try to regain the initiative from New Zealand on day three of the final Test in Auckland, says fast bowler Steven Finn.

They lost Alastair Cook and Jonathan Trott in the final hour of play.

"The loss of two wickets is slightly disappointing but we have people who can assert themselves on the game," Finn told BBC Sport.

"The game has moved forward a great deal, but the fact is England are still looking dodgy. They have got to score quite a few runs before avoiding the follow-on, and they have got two young kids in Joe Root and Jonny Bairstow coming in next. Root has had a couple of failures and Bairstow hasn't had a knock for weeks, so it's a lot of runs. England look vulnerable without Pietersen."

Nick Compton and Ian Bell are the not out batsmen after surviving a testing final few overs at Eden Park.

"It is important we came back with the two guys who are in at the moment and we really try to assert ourselves on the game again - as New Zealand did in the first day," added Finn.

"They played diligently, they were watchful and they played very well. We're going to have to do that.

"We don't have to worry about the run rate. We have to set ourselves small targets and get to those. When we come back tomorrow we will be looking to survive and accumulate, and then reassess at lunchtime or whenever that might be."

The series is tied at 0-0 after the previous two matches ended in rain-affected draws on flat wickets.

Finn said England's bowlers deserved the success they had after enduring a miserable opening day which saw the hosts compile a commanding 250-1.

Steven Finn's previous best in a Test match - and his last five-wicket haul before today - came against Australia in November 2010 at the Gabba, when he also took 6-125. It was the fourth occasion the fast bowler has taken five wickets in an innings and he now has 79 wickets from 20 Tests.

"The energy levels were good," he said. "We always make an effort to run through the overs so we feel energetic and are able to create something.

"Yesterday might have seemed from the sidelines as if there wasn't as much there - but when you take only one wicket in a day maybe it is easy to think that. I felt we were the same both days and thought we were excellent today.

"We bowled in a manner that meant they couldn't accelerate as much they may have liked to. When you bat for such a long period you may want more runs on the board but it shows the way we bowled was really good."

New Zealand wicketkeeper BJ Watling said: "We have got the runs on the board now and we got two wickets too which was crucial. They bowled a lot tighter and came hard at us this morning. We were disappointed not to make 500 but 443 is a reasonable total.

"It's a nice batting track and it's going to be a lot of hard work to take the next eight wickets. It's crucial to get the next three wickets and put England under pressure."