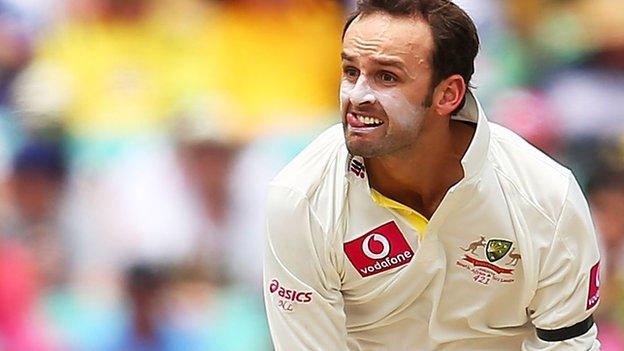 Nathan Lyon inspired Australia to a spirited fight back as they reduced India to 266-8 in the final Test.

The off-spinner took five wickets to leave India just four runs ahead at the end of day two in Delhi.

India had dispatched Australia for 262 after polishing off stubborn tail-enders Peter Siddle and James Pattinson.

The home side then raced to 103-0 in response before Lyon rattled through the order to keep alive Australia's hopes of avoiding a series whitewash.

Lyon appeared to get himself fired up after an lbw appeal against Cheteshwar Pujara was turned down and it did not take long for the 25-year-old from New South Wales to clean bowl the India opener for 52.

India captain MS Dhoni's first innings knock of 24 took him to 314 runs for the current Test series, beating his previous series best of 307, also against Australia in 2008-2009

He then trapped Virat Kohli leg before on the back foot for a single before Sachin Tendulkar fell in the same manner for 32.

Lyon's haul was completed when Ajinkya Rahane was caught at leg slip and Ravichandran Ashwin was also given out lbw with the last ball of the day.

India captain Mahendra Singh Dhoni could only add a breezy 24 to his side's score before he slapped a Pattinson slow bouncer straight to stand-in Australia skipper Shane Watson at mid-wicket.

It was a far better finishing position than Australia could have hoped for after the Indian bowlers had mopped up their final two wickets before lunch.

Siddle completed a maiden Test fifty before being bowled between bat and pad for 51 by Ashwin while Pattinson fell in the 113th over for an equally dogged 30.

The Victorian fast bowler was caught by Kohli at slip off the bowling of spinner Pragyan Ojha, who picked up his 100th Test wicket in only his 22nd Test, the third fastest Indian to that milestone behind Erapalli Prasanna and Anil Kumble.