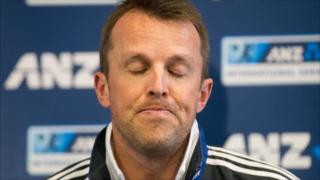 England bowler Graeme Swann tells BBC Radio 5 live he can hardly watch his team-mates in New Zealand as he recovers from an elbow injury.

Swann says: "It's hard... I'm watching Jimmy Anderson bowl and I should be at slip waiting for those edges and instead I'm just staring at his miserable face as he gets wickets and refuses to smile!"

The spinner, who has taken 212 wickets for England in 50 Tests, also reveals that he texted Alastair Cook to tell him to bat first if he won the toss in the final Test of England's current series in Auckland. England are currently up against it after winning the toss and inserting the opposition.

However, Swann tips England to win the deciding Test and hopes to be back in action for the Ashes in July.

Premier League: Man City 3-0 up and on course to go top, Arsenal equalise