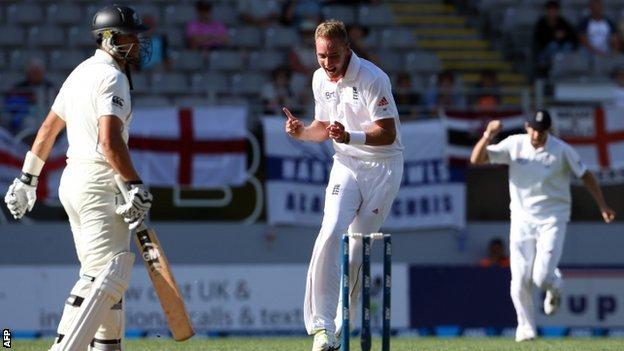 England face a massive task to avoid a series defeat after a thrilling third day of the final Test in Auckland.

New Zealand slumped to 8-3 in their second innings before ending the day on 35-3 for a commanding lead of 274.

The hosts decided to bat again rather than enforce the follow on after dismissing England for 204.

"New Zealand should have enforced the follow-on because England were wobbling. There is no KP in the middle order, so if New Zealand could have taken two wickets tonight and then a couple in the morning they would have a real chance of bowling England out. Now, if England can come out with intensity tomorrow they have a chance of bowling New Zealand out for under 100 and then it's game on. Anything can happen but this is still a good pitch."

Matt Prior made 73 and Joe Root 45 but left-arm seamer Trent Boult finished with 6-68 as England lost their last four wickets for four runs.

New Zealand led by 239 runs after their first-innings 443 but their decision not to make England bat again was soon being questioned as the tourists' bowlers gave the hosts a fright.

Stuart Broad had Hamish Rutherford caught at gully for a duck in his first over and James Anderson bowled Kane Williamson off an inside edge for one to pick up his his 298th Test wicket.

Broad then trapped Ross Taylor leg before to reduce the hosts to 8-3, meaning that seven wickets had fallen for 12 runs.

However, England were unable to make any further inroads as first-innings hero Peter Fulton and Dean Brownlie saw New Zealand through to the close.

The hosts, who have outplayed their more heralded opponents, will go into the fourth day with the belief that they can go on to win the match and break the series deadlock after two earlier draws.

New Zealand have not won a Test series against England at home since 1984 when, for the first and only time, they made England follow on to seal victory in Christchurch.

"If you knew nothing about cricket and you sat down and watched this series, you wouldn't know which side was ranked second in the world and which was eighth. Forget the scoreboard, they would think that just by looking at the standard of play. New Zealand have been excellent."

Starting the day on 50-2, 393 runs behind the hosts' first-innings score, England were in trouble from the start as Tim Southee got the ball swinging to trap Nick Compton and Ian Bell lbw.

Compton mustered only one more run to his overnight 12 before Southee overturned umpire Paul Reiffel's initial not-out decision on DRS.

Bell decided against a review, after consultation with non-striker Root, when Southee got another one to nip in and beat the batsman stuck on the crease.

Jonny Bairstow, brought in to replace the injured Kevin Pietersen, perished in similar fashion to Compton as England lost their third wicket of the morning for the addition of 11 runs.

Prior dominated a hard-working century stand with Root as England sought a much-needed recovery.

"New Zealand have only made England follow on once in 96 Tests between them - the previous occasion being in Christchurch in 1984 when the hosts won by an innings and 132 runs.

"New Zealand have got two of their four biggest first-innings leads over England in this Test series. They had a 293-run lead in the first Test in Dunedin - the third highest - and led by 239 runs here in Auckland - the fourth.

"Trent Boult's 6-68 was his first five-wicket haul in 13 Tests and also the best figures of his career, beating his previous first-class best of 5-35."

Root played sensibly, taking 126 balls to double his number of fours to two, to keep alive England's hopes of reaching the follow-on target of 244.

But the young Yorkshireman ran out of partners as left-arm seamer Boult came to the fore with his maiden five-wicket Test haul.

Broad hit Boult for two off-side fours and a six pulled over midwicket in one over, only to fire the next ball into the hands of cover.

Then Boult had Finn and Anderson caught behind, leaving Root with only Monty Panesar to help him.

The 22-year-old, playing in his fourth Test, tried to hit England out of trouble but was bowled aiming across the line as Southee ended 176 balls and more than four hours of resistance.

England's heads were down but they came out fighting to give themselves a chance of saving the match and the series, but they will need to bat much better in their second innings.