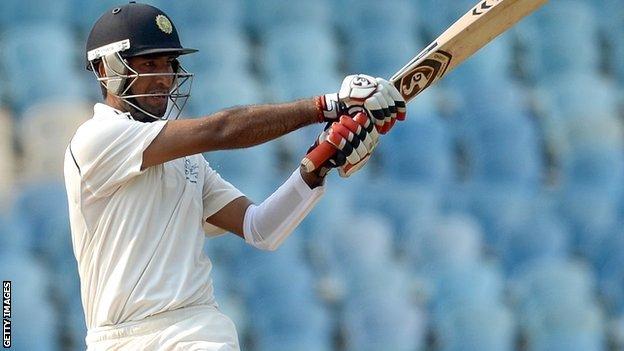 India completed a 4-0 series whitewash over Australia after winning the fourth Test in Delhi by six wickets.

The hosts bowled Australia out for 164 as Ravindra Jadeja took five wickets, allowing Cheteshwar Pujara to help seal the win with an unbeaten 82.

Only Peter Siddle's 50 offered further resistance as India reached the 155-run target with the loss of four wickets.

Lyon picked up where he left off on day two with the wickets of Sachin Tendulkar and Virat Kohli in India's second innings to take his total to nine for the Test.

But the defeat ended a miserable series for the tourists, who for the third Test, including vice-captain Shane Watson for a breach of team discipline.

It is also the first time that Australia have lost a series 4-0 since a defeat by South Africa in 1970.

Following a back injury to captain Michael Clarke, Watson was back in the Test team to skipper his country for the first time but the team selection fiasco and the series result adds a double layer of intrigue before Australia travel to England for the Ashes series in July.

Resuming on 266 for eight - having bowled out the tourists for 262 - the Indian tail had hardly settled before Lyon snared the final two wickets of Ishant Sharma and Pragyan Ojha with the first two balls of his first full over.

The renewed hope that Australia may have gained from a 10-run deficit swiftly diminished, though.

Glenn Maxwell opened the batting in place of Ed Cowan, but perished in the fifth over for eight as Jadeja claimed his first wicket on an action-packed day.

David Warner and Phil Hughes soon followed before Watson was dismissed by Pragyan Ojha for five and Australian crumbled to 94-7, with tail-end pace bowler Siddle proving the sternest test.

His 45-ball 50 then came to a close when he was stumped by Mahendra Singh Dhoni off Ashwin.

Lyon trapped Tendulkar for one as Australia tried to make the result more respectable, but Pujara continued to add quick runs at the other end as he guided his side home alongside Dhoni, who hit the winning runs and later received the Border-Gavaskar Trophy from both Sunil Gavaskar and Allan Border.