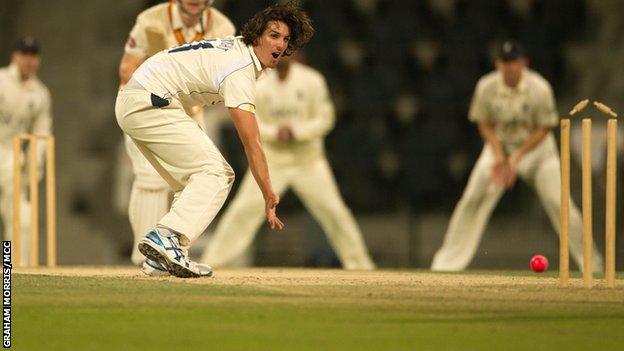 Warwickshire fast bowler Chris Wright carried on where he left off last season to help the Bears take total control against the MCC in Abu Dhabi.

Resuming on 370-3, the county champions had fifties from Laurie Evans (72) and skipper Jim Troughton (54) to thank for being able to declare on 561-6.

But Wright, the Bears' leading wicket taker in 2012, then took over as the MCC slumped to 73-7 in reply.

He took 4-23 as well as running out young Kent opener Sam Northeast.

Only three MCC batsmen made double figures, Hampshire captain Jimmy Adams top scoring with 20, as the Bears' opponents struggled, scoring at less than two an over in the the 40 overs possible before the close.

And, at one stage, in their first two sessions in the field in 2013, he had been involved in all five dismissals, until Rikki Clarke and Bears debutant Oliver Hannon-Dalby both got in on the act.

Conditions at the Zayed Cricket Stadium on the second day of the Champion County match were unusually dark, the floodlights being switched on just 15 minutes after play began (at 10:30 GMT).

And a heavy rain shower prompted umpires Trevor Jesty and Peter Willey to call the players off a few minutes prior to the scheduled lunch break.

It had taken a piece of fortune in the penultimate over before the break to earn the Bears their breakthrough, Adams' straight drive being deflected onto the stumps at the non-striker's end by Wright to run out Northeast.

And the day's final session saw Warwickshire continue to dominate, with just 59 runs added and six wickets taken, along with Joe Denly retiring hurt on 19 due to a migraine.

"I've had a look at how batsmen might perceive me but I didn't do anything very different today. I bowled good bouncers followed by good length balls which is a good staple. You definitely have to be aware of how you're perceived but then not deviate to much from what you do well.

"Given that we got over 550 on the board, we were expecting it to play a bit flatter during the MCC innings, but we managed to get it to do a little bit, which is very encouraging.

"I'm not sure there is an issue batting in the twilight period as such - we batted through it yesterday and it didn't really do much - and we didn't actually take a wicket until the lights came into full force tonight, so I think this issue with the twilight period is a bit of a myth.

"We hope to wrap this innings up without the seamers doing too much more work early on, and I expect we'll enforce the follow-on if we can. The plan is to then make early inroads with the new ball and let the spinners finish the job."

VIEW FROM THE PRESS BOX

"The unusual sight at the Sheikh Zayed Stadium on the second day was rain. A brief downpour provided the first precipitation on the ground for three months. Luckily it came at lunch so no play was lost.

"A less rare occurrence was Chris Wright taking wickets for Warwickshire. The former Essex bowler, who was a major part of the Bears' Championship push last season, looks in good form again after producing a devastating spell of four wickets for no runs in four overs.

"Although it took him a while to break through, Wright always looked a threat and his stamina meant that, once he started enjoying success, he was able to continue for an extended spell."