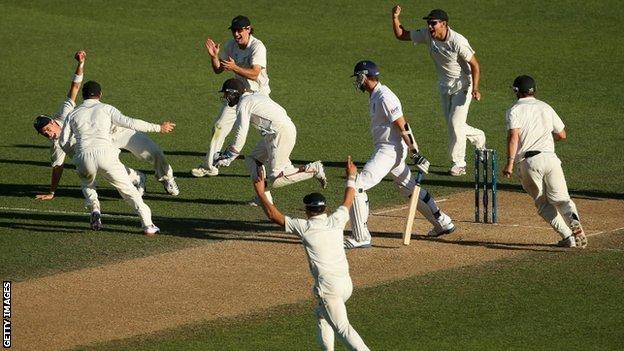 England face a humiliating series defeat after slumping to 90-4 on the fourth day of the third and final Test against New Zealand in Auckland.

The tourists lost captain Alastair Cook for 43 and night-watchman Steven Finn to poor shots in the closing stages.

"It was one of England's poorest days in the past 20 years. I have never seen an England Test team with all nine fielders on the boundary as they had during the morning session. I never want to see it again; it was the equivalent of throwing in the towel."

Opener Peter Fulton (110) became only the fourth New Zealander to hit hundreds in the same Test as the hosts declared on 241-6 at Eden Park.

England's reply got off to a terrible start when Nick Compton was caught behind off Tim Southee, but they were handed a reprieve when wicketkeeper BJ Watling dropped Cook off a difficult low chance.

England appeared to have steadied the ship but then Jonathan Trott swiped at a wide delivery from Neil Wagner and edged to Watling for 37.

New Zealand struck their biggest blow when Cook attempted an attacking drive off part-time spinner Kane Williamson and only succeeded in sending a thick edge to slip and was caught for 43.

Finn, surrounded by eight close fielders, followed in the day's last over when he rashly reached for another teasing Williamson delivery and was superbly caught at gully for a duck.

That left Ian Bell as the not-out batsman, having made eight off 89 balls, and he will need to maintain his defiance on the final day to give England any hope of avoiding defeat.

The visitors must bat for three more sessions to salvage a 0-0 series draw and preserve their status as the world's second-best side.

It would be an embarrassing defeat against a New Zealand side ranked eighth in the world and largely written off before the series.

But the hosts, who last recorded a series victory over a top-eight Test team in 2006, would deserve only their fourth series triumph against England after outplaying their opponents with both bat and ball.

The fact that New Zealand ended their innings with a national record of 16 sixes in the match, 15 more than England have managed, showed their dominance.

With New Zealand leading by 274 at the start of the day, the tourists set out with hopes of bowling their opponents out cheaply in their second innings.

Monty Panesar saw off Dean Brownlie for 28, thanks to a superb catch on the run by Bell at long-on, but that was the only wicket to fall before lunch as the hosts bullied England's bowlers.

Broad had Fulton put down by James Anderson at short midwicket when the tall opener was on 31, but thereafter Fulton and McCullum took advantage of some negative fields and benign bowling.

Fulton, 34, followed his maiden Test century in the first innings with a powerful display of hitting in the second, including five sixes.

His stand of 117 in 101 balls with captain Brendon McCullum (67 not out) was an embarrassing passage of play for England, who became increasingly ragged and lost their composure with nine players on the boundary at one stage.

Fulton completed his hundred with a straight six into the stands but was out shortly afterwards when he pulled Finn to long-on.

McCullum passed 50 with a fierce drive down the ground for his 10th four, swept another boundary off the next ball and then fired a straight six at the start of five-over spell which cost Panesar 52 runs.

When McCullum finally called an end to the innings after Watling was caught in the deep, England were handed the notional target of 481 to win the match.

Given the circumstances it was always extremely unlikely that England would get into the position to force a victory and history is not on their side.

They would have to shatter Test cricket's highest fourth-innings run chase - the 418-7 West Indies made to beat Australia in 2002-03 - to win.

England's highest successful chase is the 332 they made in 1928-29 to beat Australia in a timeless match in Melbourne, while the highest run chase at Eden Park is the 348 made by West Indies in 1968-69.