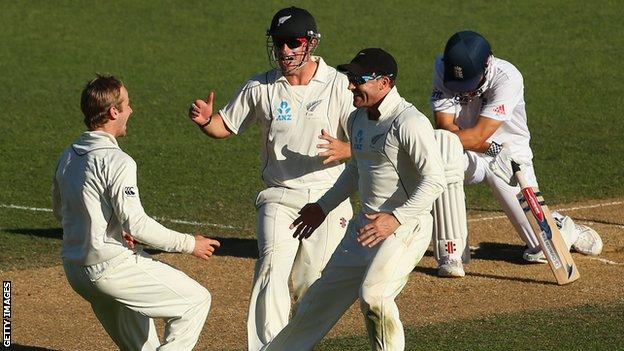 England must bat out the fifth day after finishing day four of the series decider on 90-4, 390 behind.

"I'm not giving any excuses because we have been outplayed, but we still have a chance to salvage something," Gooch told BBC Sport.

Asked if the team still had belief, he added: "Absolutely. Otherwise, what's the point in turning up?"

"It was one of England's poorest days in the past 20 years. I have never seen an England Test team with all nine fielders on the boundary as they had during the morning session. I never want to see it again; it was the equivalent of throwing in the towel."

The responsibility of securing the draw will rest on the shoulders of Ian Bell, who spent almost two hours making eight not out, and the novice Yorkshire duo of Joe Root and Jonny Bairstow.

"Losing those two wickets at the end has made [New Zealand] favourites to win the game," said Gooch. "We're under a lot of pressure but we have some good players in our dressing room, some good young players and we have to believe we can save the game."

Gooch admits England have not performed to their full ability and says it should serve as a warning about underestimating opponents.

"I think it's a great reality check that you can't take any team lightly, and you can't play people on what it says in the rankings or what it says on a piece of paper," said Gooch.

"Our performance is not up to the standard we've produced in the past, on a consistent basis - so we'll have to look at that."

"The third wicket of Alastair Cook was massive for us because he has shown he can bat for a long time. The night-watchman was a bonus and it leaves us in a pretty good position.

"We've got plenty of hard work to do but if we can do the job again then it gives us a good chance of getting a result."

New Zealand are chasing only their fourth series triumph over England and owe a significant part of their dominance at Eden Park to Fulton's impressive batting.

The 34-year-old opener became only the fourth New Zealand player to score a hundred in both innings as his side took England apart at the start of the penultimate day.

"I can't believe how this Test match has turned out for me," added Fulton. "I was delighted with the first century so to get the second one... it probably hasn't sunk in yet to be honest."

England are in distinct danger of finishing an otherwise encouraging winter, including an historic Test series win in India, on a low.

"It's not the sort of conclusion to the winter tours we would have wanted, that's for sure," admitted Gooch.

"Here, we've not found that form, so we've got to be disappointed. You can't be happy with the way we've played."