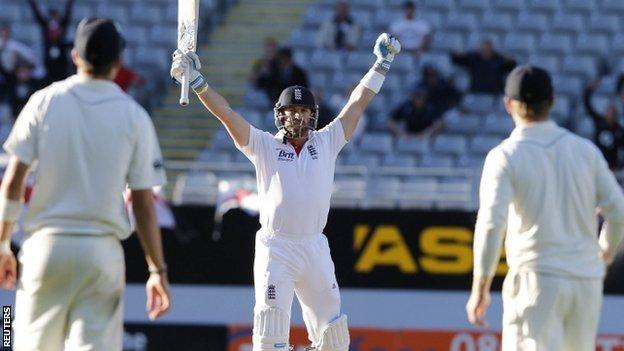 England's last-wicket pair held on to secure a stunning draw in a thrilling third Test against New Zealand.

Matt Prior made a magnificent unbeaten 110 and Monty Panesar faced five balls at the death to deny the hosts a series victory at Eden Park in Auckland.

Test cricket at its best

"We had everything on the final day: England's last-wicket pair together; a comical near run-out with number 11 Monty Panesar diving to make his ground; an impassioned crowd urging New Zealand towards a rare series win; and the game not decided until the final ball.

"Only Test cricket can provide these wonderful finishes, which is why it is the purest form of the sport and why it needs to be preserved and cherished."

Prior and Stuart Broad defended stoutly after coming together at 237-7 at tea, but Broad and James Anderson fell in the fourth over before the close.

However, Prior and Panesar clinched the draw with England on 315-9 at the end.

Prior, who successfully overturned an lbw decision and survived the ball hitting his stumps earlier in his innings, faced 182 balls and batted for four hours and 29 minutes.

It was the 31-year-old vice-captain's seventh Test century and the longest innings of his 65-Test career.

It is only the third time in Test cricket that a team had gone into the final day of a match with four wickets down and avoided defeat.

With Ian Bell dismissed in the last over before tea for a battling 75, Prior was left with three tail-enders going into the final session.

Broad, who has been in horrible form with the bat, also overturned an lbw decision, but batted with admirable discipline.

He eventually got off the mark to his 62nd ball faced, after a Test record 103 minutes in the middle.

With the tension growing, Prior almost played on but missed his leg stump by the smallest of margins.

The wicketkeeper brought up their fifty partnership, having hit all the runs, and moments later reached his century with a muted celebration.

Boult thought he had Broad lbw to one that jagged back but he survived thanks to another review, while Prior was almost caught six overs from the end.

New Zealand looked increasingly desperate as the overs ticked down but Kane Williamson had Broad and Anderson caught at slip in the space of three balls.

That brought in Panesar and he anxiously held his nerve, despite almost being run out in comical fashion after mistiming a dive to make his ground.

England went into the series with many experts predicting a comprehensive victory following a historic series triumph in India.

• England are the third Test side to bat out the entire final day having been four wickets down overnight. England against South Africa at Johannesburg in 1995, when Michael Atherton finished unbeaten on 185, and South Africa in Australia last year, are the others.

• Matt Prior batted for four hours and 29 minutes, to salvage the draw in Auckland. It is his longest innings in a Test.

• Stuart Broad set a new Test record for the longest time at the crease without scoring. He needed 103 minutes to get off the mark, beating the previous record of 101 minutes set by New Zealand's Geoff Allott against South Africa in 1999 - also at Eden Park.

But Alastair Cook's side failed to match the high standards set before Christmas and, after two rain-affected draws, were thoroughly outplayed over the first four days after putting the hosts into bat.

The draw, however, means England remain above India in second place in the International Cricket Council Test rankings and denies New Zealand what would have been only their fourth series win against them.

Starting the day on 90-4, and with the victory target of 481 no longer relevant, England needed to bat for a minimum of 90 overs.

Bell and Joe Root dropped anchor but fell just short of batting through the first session.

Left-arm seamer Trent Boult needed just one delivery with the new ball to break a stand of 60 - Root departing leg before for 29 pushing forward to an inswinger.

Bell and Jonny Bairstow were both dropped in the final over before lunch. The Warwickshire player was dropped at fourth slip by Dean Brownlie on 40 and Bairstow was put down at gully by Williamson two balls later as England went into the break on 158-5.

Bairstow, who has played only two first-class innings since August, was out for six after the interval when he edged Tim Southee to first slip.

Prior was given out lbw to Southee but the wicketkeeper had inside-edged the ball and successfully overturned umpire Rod Tucker's decision on review.

"It was very dramatic and had everybody on the edge of their seats all of the time. It was a great advert for the game. You can't tell me that Twenty20 cricket is better than that. There were moments where you thought England were getting home and then someone would get out. In the end it was left to Monty Panesar to get the finest single of his life to get out of the way and let Matt Prior see the job through."

Prior kept playing his shots but had another close call when he pulled Southee high into the air, only for a diving Neil Wagner to just miss the toughest of overhead chances running back from midwicket.

Then, on 28, the Sussex wicketkeeper somehow survived when a short delivery from Wagner ricocheted from his shoulder to his helmet and then onto the stumps, but without dislodging the bails.

He survived another huge appeal from the Kiwis for a catch behind before Bell edged to Southee at third slip and departed after 271 balls of resistance.

His departure left Prior as the last recognisable batsman in England's rearguard action, but he was more than up to the task.