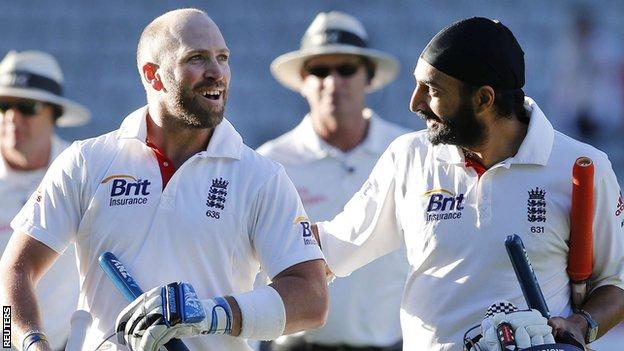 Matt Prior said England produced an "unbelievable" effort to bat out the final day and secure a draw in the Test series decider against New Zealand.

Prior, who made an unbeaten 110, held firm with last man Monty Panesar as England finished on 315-9 in Auckland.

"I'm not one to celebrate draws but to escape with that is a phenomenal effort," said Prior.

"I think Monty had been sleeping so I had to wake him up first, but he was magnificent. I knew he'd be fine."

Test cricket at its best

"We had everything on the final day: England's last-wicket pair together; a comical near run-out with number 11 Monty Panesar diving to make his ground; an impassioned crowd urging New Zealand towards a rare series win; and the game not decided until the final ball.

Only Test cricket can provide these wonderful finishes, which is why it is the purest form of the sport and why it needs to be preserved and cherished."

Prior said he reminded the spinner of the rearguard action in Cardiff in 2009 when Panesar and James Anderson combined to defy Australia at the death.

"He was actually really calm," said Prior, after the duo batted out the final 19 balls under intense pressure at Eden Park. "We mentioned the Ashes, we mentioned Cardiff. He was really chilled out.

"All our guys have been working so hard in the nets for that exact moment."

Ian Bell and Joe Root set the tone by batting for almost the entire first session, with Bell going on after lunch to make a determined 75 from 271 balls.

His departure in the final over before tea meant Prior had to steer the tail-end batsmen through to the close.

The Sussex wicketkeeper praised Stuart Broad, who batted for a record 103 minutes without getting off the mark, for his 77-ball innings of just six runs.

Broad has endured a miserable run with the bat but his innings used up valuable overs.

"The way Joe Root and Ian Bell started this morning was phenomenal and I have to give a special mention to Stuart Broad," said Prior.

"The way Broady played was phenomenal. He's been working so hard with Andy Flower in the nets and has been getting frustrated with it.

Prior, who made a half-century in the first innings, faced 182 balls and batted for four hours and 29 minutes, having come to the crease just after lunch.

It was the 31-year-old vice-captain's seventh Test century and the longest innings of his 65-match Test career.

"At the moment Matt Prior is probably the best wicketkeeper-batsman in the world - with AB de Villiers maybe - and he would get in the side as a batsman, but the fact he took two fantastic catches behind the stumps just shows his all-round value. His innings was superb because he is a naturally attacking batsman. We are used to seeing him taking the ball on and having a real go, but the situation demanded real patience and that is what he provided."

Asked how he approached the day, Prior said: "You've got to find a way to face 90 overs. The wicket was still good, and we knew it was only going to get slower. You just dig in for as long as you can."

Defeat by the eighth-ranked Test nation would have dropped England to number three behind South Africa and India in the Test rankings, but captain Alastair Cook insisted complacency had played no part in their difficulties.

"At no stage did we underestimate New Zealand," said Cook. "We did not play as well as we would have liked, but that takes nothing away from New Zealand, who put us under huge pressure."

"We pretty much tried everything. We came up against some of the best players going around at the moment. They were outstanding. We tried everything but came up just short. It was a wonderful Test match."

England will now prepare for home series against New Zealand in May and then Australia in July and August.