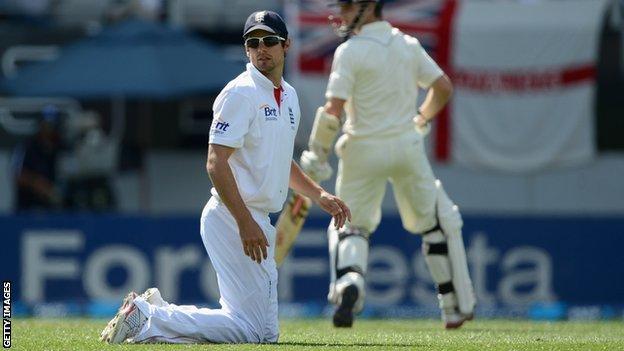 England captain Alastair Cook rejected claims his side took New Zealand for granted during the three-Test series that reached a thrilling climax in Auckland on Tuesday.

Matt Prior hit 110 not out as England held on to force a draw with one wicket remaining and draw the series.

"We didn't play as well as we could do and you get found out very quickly in international cricket."

Lessons to be learned

"Like England as a team, I hope Alastair Cook learns from this series. He is still a very inexperienced captain who has not had the benefit of leading a county side. He is learning all the time - both tactically and in terms of how to deal with people - but he needs to be a little more attacking and show more authority in the field at times.

There are also lessons to be learned by the England management. Team director Andy Flower must admit the preparation was not good enough; England cannot afford to have the situation where they have a solitary first-class game before a Test series."

It is the fourth time in less than four years that England have hung on for a draw with nine second-innings wickets down, following the Tests against Australia at Cardiff in 2009 and South Africa twice in a series, at Centurion and Cape Town, in 2010.

But although Cook praised his side's spirit, he acknowledged there was more work to do before this summer's Ashes series against Australia, which begins on 10 July.

"It shows how far we have got to go - you are never as good as people make you out to be," he added.

"We've got to find out the reasons we didn't play as well as we could and get back on that horse and get our standards higher.

"In this series we haven't bowled as well as we would have liked and twice our first innings batting wasn't as good as it should have been. It shows how tough it is - New Zealand are a very good side and put us under pressure.

"But the one thing we have in this group of players is a huge amount of fight and we take a lot from that and from being able to bat for a long time under pressure and deliver.

"We don't necessarily want to find ourselves in that situation, but we are turning ourselves into a tough side to beat."

• England are the third Test side to bat out the entire final day having been four wickets down overnight. England against South Africa at Johannesburg in 1995, when Michael Atherton finished unbeaten on 185, and South Africa in Australia last year, are the others.

• Matt Prior batted for four hours and 29 minutes, to salvage the draw in Auckland. It is his longest innings in a Test.

• Stuart Broad set a new Test record for the longest time at the crease without scoring. He needed 103 minutes to get off the mark, beating the previous record of 101 minutes set by New Zealand's Geoff Allott against South Africa in 1999 - also at Eden Park.

Cook was also full of praise for Prior who, along with Stuart Broad and Monty Panesar, helped guide England through the latter part of the final day at Eden Park.

"Matt has been outstanding the whole winter both in batting and behind the stumps in tough conditions in India. It is great to see him get a hundred and get the guys home," said Cook.

"He has recovered from the hiccup he had after about 10 or so Tests and has shown real character and transformed himself into a leader in this side and a very reliable player. We needed someone to be a hero here and he was."

New Zealand captain Brendon McCullum paid tribute to his side's display as they narrowly missed out on a first series victory over England since 1999, and only their second ever against them on home soil.

"That's heartbreaking," he said. "We've played some brilliant cricket throughout the series, but especially in this Test, and dictated terms from day one.

"We gave it every chance to force a result but came up against a defiant England team who were hell-bent on ensuring they did not lose a Test for their country - and unfortunately we weren't able to get that one more wicket.

"I'll make sure I go round all the lads. I'm incredibly proud of the way they've performed in this series and confronted one of the giants of world cricket."