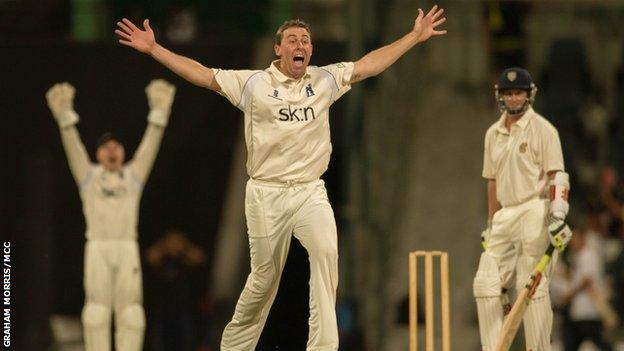 Warwickshire eased to an expected victory in Abu Dhabi as they saw off the MCC in the annual Champion County match by an innings and 29 runs.

England Lions seamer Rikki Clarke took three of the last four MCC wickets to fall, to finish with figures of 4-33.

The Bears' innings victory was the biggest winning margin by the county champions against the MCC since the fixture was moved to the Persian Gulf in 2010.

It is also the first time they have won this now once again annual match, which had previously been played at Lord's up until 2009.

The Bears suffered defeats in their two previous meetings with the MCC at Lord's, by 133 runs in 1973, and by seven wickets in 2005, when the match-winning stand came from Alastair Cook and Andy Flower.

The MCC's second-innings total was their highest in the four Champion County matches that have been played in Abu Dhabi, beating the previous best of 357, set by Chris Rogers' MCC team in the second innings against Nottinghamshire in 2011.

It owed most to Middlesex opener Denly, who added a further 27 runs to his overnight 119 before becoming the third of Clarke's four victims, bowled for 146.

"We know what our method of winning four-day cricket matches. We've come out here in conditions which aren't English and we've continued to go with that method and been successful so that's what made it a little bit more rewarding than usual.

"We lost two spinners, Paul Best and Ateeq Javed, which is not ideal in these conditions but the three seamers, Chris Wright, Rikki Clarke and Oliver Hannon-Dalby, have been absolutely fantastic. To win by an innings is a fantastic effort.

"We've got a couple of niggles back home but hopefully they're not too serious. We've got young guys who've come through, who have impressed me and all the batting line-up look in solid nick."

"To be bowled out for 130 in the first innings meant that we were always going to be up against it.

"Credit to Warwickshire. They bowled fantastically well, especially under the floodlit conditions on day two.

"With respect to the day-night format, the match went really well on the whole. All the pink balls stood up fantastically well, they were very durable, had good visibility throughout, and there were no complaints from any of the players."