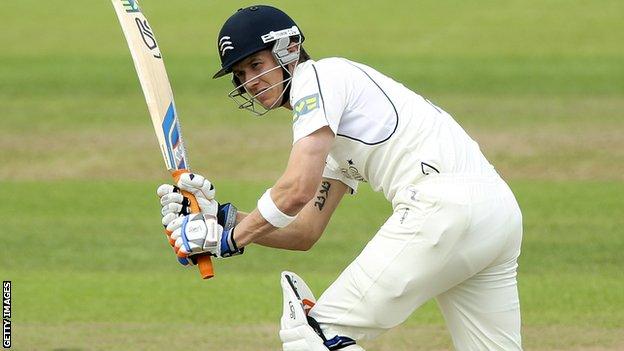 Joe Denly struck his 15th first-class century to hold up Warwickshire's push for victory in the county season curtain-raiser in Abu Dhabi.

Denly top scored with 47 as the MCC were all out for 130 in their first innings, Chris Wright taking 5-35.

The MCC resumed day three on 73-7 with Steve Kirby and Denly at the crease, with the latter continuing having suffered a migraine the previous evening.

But Wright soon bowled Kirby in the third over of the day to complete his five-for and Yorkshire bowler Oliver Hannon-Dalby took the final two wickets of Denly and Chris Rushworth to leave them 431 runs in arrears.

Having enforced the follow-on, Paul Best had Jimmy Adams caught by Ian Westwood in the eighth over as Warwickshire looked to press for victory inside three days.

But Denly joined opener Northeast at the crease to share a third-wicket stand of 156 and halt the Bears charge.

Northeast's steady 89 from 146 balls, including nine fours, was eventually ended by Wright, who had the 23-year-old caught by Hannon-Dalby.

Rikki Clarke bowled Dale Benkensein for five and substitute fielder Peter McKay caught Dawid Malan off the bowling of Hannah-Dalby for 28 to swing the momentum firmly back in Warwickshire's favour.

But Peter Trego, out for a seven-ball duck in the first innings, combined with the impressive Denly to ensure no more wickets would fall before the close.

The Somerset man finished not out on 57 from 50 deliveries - an innings which included five fours and two sixes.

Denly, meanwhile, hit 15 fours in a confident 119 from 190 balls to keep the MCC's hopes of salvaging a draw or even better alive heading into the final day.

VIEW FROM THE PRESS BOX

"While it wasn't the day Warwickshire wanted, the MCC's determined fightback gives the fixture creditability and sets up a competitive final day.

"The MCC captain Dale Benkenstein was bullish at the close claiming his side can still win and suggesting Warwickshire helped his team when they enforced the follow-on.

"The Bears weren't helped by the loss to injury of main spin bowler Paul Best [back problem] and his intended back-up Ateeq Javed [thigh strain], leaving Laurie Evans to bowl a marathon spell of spin, which he's never previously delivered in first-class cricket.

"Jim Troughton's men will hope the new ball, due early tomorrow, will help them get back on top."