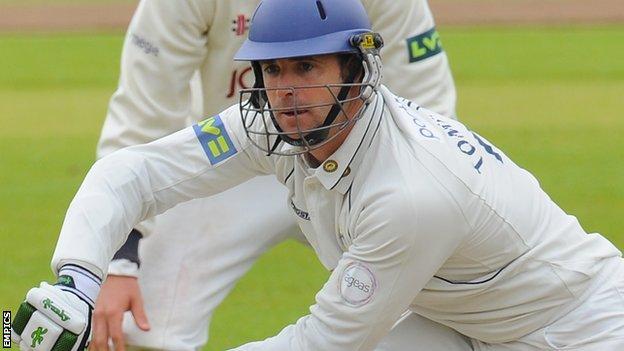 Hampshire bowler James Tomlinson is hoping to be fit for the start of the new County Championship season.

Tomlinson has been absent for the start of the campaign for the last two years with a persistent ankle injury.

But having avoided a flare-up this pre-season the 30-year-old has set his sights on the opener against Leicestershire next month.

"The key point is to be fit for the start of the season this year," he told BBC Radio Solent.

"For the last two years I've missed the first few weeks because my ankle blew up on hard wickets in Barbados.

"Luckily we've not made the same mistake this year.

I'm raring to go and very excited. I'm very fit and I've lost a bit of weight, which was the first thing they told me to do about my ankle. I feel really good

"I'm raring to go and very excited. I'm very fit and I've lost a bit of weight, which was the first thing they told me to do about my ankle. I feel really good.

"We've got three two-day games coming up and I'm really looking forward to getting stuck into them.

"I hope to be involved in all of them. It's important I get the overs in because I'm probably a couple of games behind everyone else."

The former Wiltshire left-hander was the top first class wicket-taker in 2008 but has struggled with injuries since and made just six Championship appearances in 2012.

Tomlinson admitted to having on-going concerns over his ankle problem, but said he hopes to continue travelling to Barbados with the Hampshire squad despite the risk posed by harder wickets on the tour.

"We've managed it but I am a little bit undercooked," he said.

"Barbados is a high-risk place for me with the hard wickets so early on in the season but I would love to keep going out there.

"It's a great trip, it's great to be around the lads and I've been doing a bit of coaching out there as well.

"However it's getting to the point where I have got to look after my foot over the winter.

"I've bowled a lot of overs across the years and my ankle really is a bit of a problem.

"On the softer English wickets it gives it the best chance to get going, then by the end of the season I've generally got through it pretty well."

Hampshire open their Division Two campaign at the Ageas Bowl against Leicestershire in a fortnight's time, hoping to go one better than the draw they recorded in the corresponding fixture last season when rain halted play on the final day.

New signing Adam Wheater will also play in the pre-season friendlies this week as the 23-year-old wicketkeeper completes his recovery from a side strain.