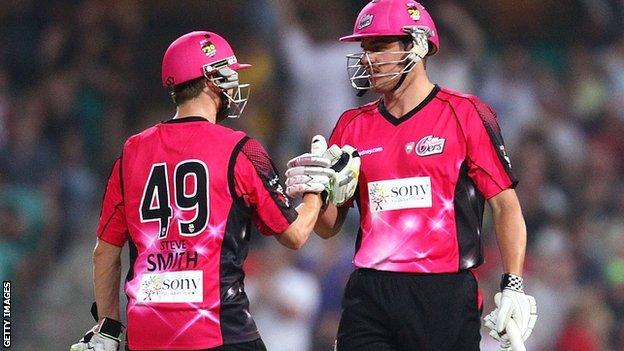 Australia have announced their list of centrally contracted players for 2013-14 - with several recent Test players omitted from the 20-strong list.

Jackson Bird, Moises Henriques, Usman Khawaja and Steve Smith were all in the Test squad in India last month, but have missed out on contracts.

Batsman Khawaja was one of four players controversially dropped for the third Test for a breach of discipline.

Australia visit England this summer as the hosts look to defend the Ashes.

Smith, along with the other names left out, is still in contention for the Ashes, which begin at Trent Bridge on 10 July.

"Steve Smith is one - he acquitted himself well in the third and fourth Test and he's a young player who has a future so he's in contention," said national selector John Inverarity.

"Usman Khawaja is strongly in contention for the Ashes [but his lack of recent red-ball cricket] is a concern."

There are only five established Test batsmen in the new list, including captain Michael Clarke and his deputy Shane Watson and Inverarity admitted Australia's lack of depth with batsmen is a worry.

"There is a concern, I mean we do not have the batting depth now that we enjoyed seven or eight and 15 years ago, we just don't," Inverarity said.

"And that's something that cricket in Australia really needs to address and we need to get more batsmen making runs prolifically."

Elevated to the centrally contracted list are batsmen Ed Cowan and Phillip Hughes, who both look set to feature in this summer's Ashes, and Twenty20 captain George Bailey, who has been a one-day international regular for the past year but has yet to play a Test.

Also included were three one-day specialists - Glenn Maxwell, who made his Test debut in India, Clint McKay and James Faulkner, as well as seamers Patrick Cummins, Ryan Harris and Ben Hilfenhaus, who have all struggled with injury in recent months.

Batsman David Hussey, a limited-overs specialist who has played 69 ODIs and 39 T20 internationals. did not have his deal renewed and Inverarity hinted a move towards youth could mean the end of his international career.

"I'd never say never about anybody but it is an indication that we're looking towards grooming some younger players," he said.

"As we all appreciate we're very much in a transition stage in Australian cricket."

Hussey's brother Mike and ex-skipper Ricky Ponting, who have both retired from international cricket, were the other two players who were not retained from the 2013-14 panel.

"The runs they made and the general confidence and leadership they showed, they are big losses," said Inverarity.