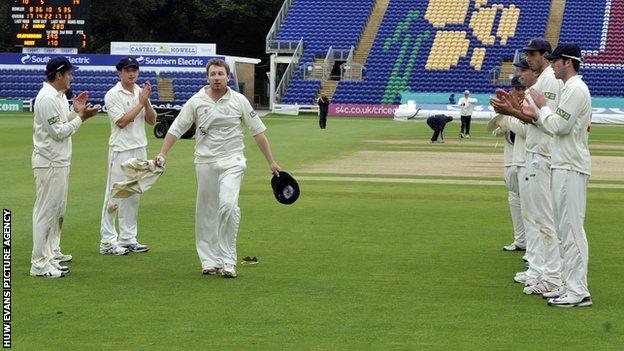 There is certainly a feel-good factor in Welsh sport at the moment.

After Wales' memorable win against England in the Six Nations, Swansea City's Capital One Cup success at Wembley and Cardiff City poised for promotion to the Premier League, let us all hope for a resurgence in Glamorgan's performances during the next six months.

There have been too many false dawns in recent years and too many upheavals that have affected on-field performances, but the general belief this year is that the squad is good enough to compete in three competitions.

We will have to wait until 27 September, the latest ever finish to a season, to see whether this optimism is justified.

Unlike the start of last season when overseas player Marcus North did not arrive until the fifth Championship game and Alviro Petersen changed his mind, there will be a full complement to start the campaign.

North arrives with extra responsibility, combining his role of overseas player with leading the team in two one-day competitions.

The former Australian Test batsman averaged 45 runs last year, but during the winter not only relinquished the Western Australia one-day captaincy but was subsequently left out of the four and one-day teams.

North and the other batsmen will need to improve on last season's form when no-one exceeded 1000 first-class runs and only seven centuries were scored, compared to 10 the previous summer.

The atrocious weather did not help, resulting in bowler-friendly pitches throughout the season, and Gareth Rees is unlikely to experience such a poor season when he was left out towards the end of the summer.

Murray Goodwin has been signed on a one-year contract to bolster the middle order, but the 40-year-old former Zimbabwean international needs to score consistently as there will be younger players challenging for his place.

There should not be a shortage of runs with Jim Allenby batting at number six followed by Mark Wallace and Graham Wagg, but solid starts are essential if Glamorgan are to build first-innings totals from where they can control a game.

Glamorgan's seam-bowling attack has been centred around James Harris for the past five years, but the England prospect is now with Middlesex.

However, the club are fortunate to have signed Michael Hogan from Western Australia. The 31-year-old seamer has relinquished his Australian status and he will not play as an overseas player, and if he can replicate his performances in the Sheffield Shield he could prove a valuable asset.

With spinner Robert Croft now concentrating on coaching after a 23-year career, his successor Andrew Salter will have the opportunity to develop, while Dean Cosker will be eager to forget the disappointment of last season's meagre return of just 11 first-class wickets.

Glamorgan have experienced too many seasons which have promised so much but delivered so little.

Although a one-day trophy appears optimistic, there is enough talent to challenge for a top two place in the second tier of the County Championship - after all who would have tipped Derbyshire as Division Two champions 12 months ago?