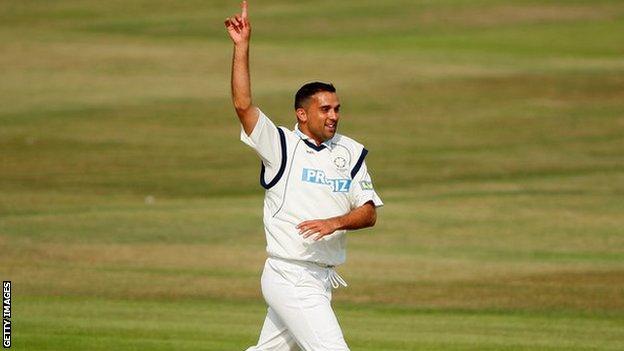 Kabir Ali is hopeful of making his Lancashire debut by the end of April after injuring his knee playing in the Bangladesh Premier League.

The former England pace bowler has

"I'll miss the first one but, fingers crossed, I should be back for the second one (against Kent on 24 April)."

after three seasons with Hampshire, and he expects his former county to be challenging his new side for the Division Two title in 2013.

"Hampshire will be a strong side," he added. "There will be quite a few, but on the day we're better than anyone. Hopefully we'll on the right end of the results this year."

I'm quite experienced but I've still got a lot to learn

At the age of 32, the ex-Worcestershire man is expected to lead an experienced pace attack along with captain Glen Chapple, who is seven years his senior.

Kabir continued: "We have quite a young squad but I'm ready to learn the game myself from the likes of him [Chapple].

"I've always looked up to him and if I learn anything from him I'll be a very happy man.

"It's a game which is getting quicker and faster. It's developing all the time.

"You can never been 100% sure about this game because there's something new coming up every other day. I'm quite experienced but I've still got a lot to learn."