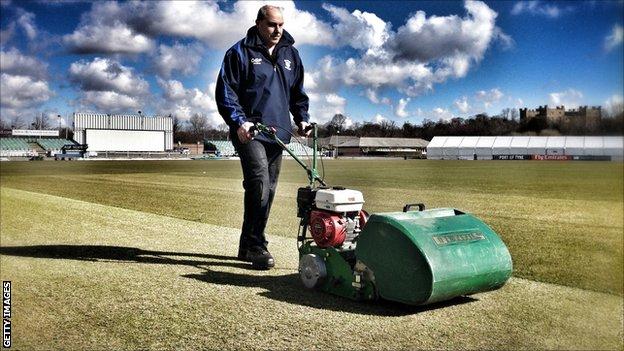 Durham's title successes of 2008 and 2009 were a remarkable achievement for a county that only achieved first-class status in 1992.

Thanks to the direction of chief executive David Harker, the coaching of Geoff Cook, and a crop of talented, mostly locally-born players, the county usurped heavyweights such as Nottinghamshire, Sussex and Somerset to lift the big prize.

However, in the three seasons since then, Durham have been unable to add to the trophy cabinet and it is down to Cook to rebuild the squad for another tilt at silverware.

Gone are and With the door is open for a new crop of homegrown players to step forward.

I expect the ambition of the players to take them forward, their ability along with the ambition and the unity to take us forward as well

"When the blueprint for Durham was drawn up, the big drive was to give opportunities to local players who were going off to play for other counties, and I think we've provided that in spades," Cook told BBC North East and Cumbria Sport. "We're in a situation now where there are going to be opportunities for younger players."

The players to benefit are those who came through for Durham toward the end of last season, and who helped salvage the club's Division One status after a difficult campaign.

Paul Collingwood, back in first-class cricket after his England Test retirement, was handed the captaincy and with Keaton Jennings, Michael Richardson and Mark Stoneman coming into the first team, he guided the county to five wins and a draw from their last six matches to finish sixth and well clear of the drop zone.

"People like Jennings came in did ok and showed promise. Richardson, who was prolific in the seconds, came in and did ok and Stoneman has done well in patches in various competitions, while [Scott] Borthwick and [Ben] Stokes have gone on to represent England at Lions level," Cook added.

"All these guys are 24 and under. With a host of cricket in front of them, they are going to be the backbone, the centre of the team, for years to come.

"Their challenge as individuals is to get consistency and seasons behind them as opposed to encouraging isolated performances."

Jennings, a 20-year-old South African, was brought into the top end of the batting order as Di Venuto phased out his first-class career, and made important knocks against Worcestershire, Nottinghamshire and particularly

It's important for me to bowl well and take wickets for the side. That's my job and, if I do that well, I could potentially be picked for England

"It's important to come in and know you can compete, to hang around and get that assurance you are there and can play instead of trying to survive," Jennings said.

Former captain Dale Benkenstein's presence has helped, as an experienced campaigner with plenty of pass on to the emerging talents.

"'Benks' has been a tremendous role model to bounce ideas off, to have there knowing if something goes wrong, you've got a conduit to bounce things off," Jennings added.

"There are lots of guys in the changing rooms who can do that."

Although his involvement at Chester-le-Street may be limited by international recognition, Graham Onions's wicket-taking capabilities will be crucial to hopes of silverware in the north east.

His haul of 64 Championship victims was another factor in the end-of-season revival, and led to his call-up to the England touring squad.

"The winter has been good. I've visited India and New Zealand - two fantastic countries - but it's frustrating I haven't played a great deal of cricket," Onions said.

"I've only been back a few days but the lads seem in really good shape, and it's important for me to bowl well and take wickets for the side.

"That's my job and, if I do that well, I could potentially be picked for England. But that's a long way ahead and you can't look too far ahead."

Onions is now one of the elder statesmen at Durham at the age of 30, having himself graduated from the second team to become a pivotal member of the squad.

Retaining the title: What happened next?

Durham achieved the relatively unusual feat of retaining the County Championship title in 2009, but have been unable to bring silverware to the north east since.

But what of other recent members of the 'two-in-a-row' club?

Having retained their title at the turn of the millennium, Surrey were gunning for a hat-trick in 2001, but saw their bid dented by 12 draws, more than anyone else in the division and finished fourth. However Keith Medlycott's side roared back to the Championship in 2002, losing only two games and winning 10. However, three years later, Surrey were relegated.

Sussex's brace of title wins eventually saw them give way to Durham in 2008 - the side they pipped the previous season. Too many draws - 12 - and just two wins left the defending champions in sixth, just five points clear of relegated Kent. The following season they did face the drop, but bounced back in 2010, although have failed to finish in the top two since.

"I'm getting there, although I don't feel older, but I have a few grey hairs and my own little family which has changed my life, but it's exciting," he continued.

"When I was young I used to look up at Steve Harmison, Neil Killeen, Simon Brown and those guys and I wanted to be part of an attack that I felt could win things.

"I see myself now leading an attack with some promising youngsters and of course experienced players as well.

"In my career, from when I first started, I've done some things which I am very proud of and the next few years will be very important. Hopefully we're going to win some silverware."

That, of course, is the target for coach Cook - a Teessider who was forced to leave his native north east to play professional cricket, but has played a major role in the development of Durham as a county since his arrival in 1991.

A lack of big-name signings has placed them among the bookmakers' favourites for the drop, but the former England batsman has confidence in his players regardless.

"When you have a team of experienced, match-winning cricketers as we've had in the past, there is an air of expectation," Cook said.

"But I expect the team to do really well this year, coming from another angle.

"I expect the ambition of the players to take them forward, their ability along with the ambition and the unity to take us forward as well."

Jennings agrees, and believes there is enough experience and quality in players such as Collingwood, Steve Harmison and Chris Rushworth.

"There's still a lot of level heads at Durham. With guys performing, we can be in the top two or even win the competition and I'd love that to happen," he said.

"But if you have three or four games rained off, suddenly your back is up against the wall and you're punching from the ropes.

"Durham are a very good side, a hard side to break into and a strong unit, but hopefully we'll be punching for a top-two place."