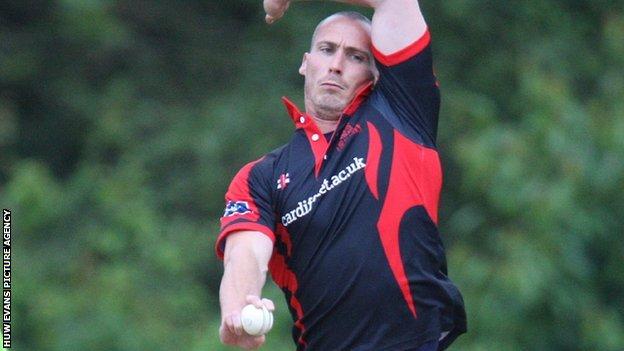 It's early April at Glamorgan's Swalec Stadium and the sun is shining, but you can't hear the crack of leather on willow for the chattering of teeth.

The Welsh county's players are meeting the media ahead of the opening first-class fixture of the new cricket season and winter is not keen to relinquish its grip.

It's freezing and, appropriately, Simon Jones is talking about ice.

Ice packs to be precise, which he has to apply to his damaged knee twice a day to stop fluid gathering on the joint.

It's nearly eight years since the fast bowler earned himself a place in the nation's affection as part of the England bowling attack which helped wrestle the Ashes from Australia in the thrilling series of 2005.

He missed the final Test match of the series at The Oval, and his career has been punctuated by long lay-offs ever since.

The fast bowler has played in only three four-day matches in the past four years, but this season has a new contract which for Glamorgan.

Injury record: Jones has suffered anterior cruciate knee ligament damage, an ankle injury and a micro-fracture to the knee which required major surgery.

Which is where the ice comes in.

"I invested in an ice machine," Jones says. "I'll ice my knee in the morning and at night. The machine compresses and releases so it flushes out your knee. It's takes 20 minutes."

Jones paid £2,500 for the machine himself and considers it a sound investment.

"I thought I'm going to use this every day throughout my career, so as an investment it's helped me massively.

"I think Premier League teams have one for every player. It was something I desperately needed. A bag of ice or a bag of peas doesn't do the job."

Doing the job is a subject foremost in the mind of Jones as he prepares for the season with an enthusiasm that belies his age, experience and injury record.

"I've perhaps got a couple of years left in me and don't want to go out wondering.

"This year I'll have a go - I'm not going to leave any stone unturned.

"I'm confident and not worried about it. It's about me getting overs under my belt and time in the field, whether that's in the second team or however I can get it.

Glamorgan's director of cricket Matthew Mott will have a big say in which four-day matches Jones will play.

Last season he was employed on a one-day contract, concentrating on Twenty20 and Pro40 matches, with just one appearance in a four-day match against Derbyshire.

He's hoping to be a lot busier this season. "We're going to be selective about the wickets I play on," Jones says.

"I don't want to be running up and bowling on an absolute road. You want to have something with a bit of pace and carry in it.

"I'll be happy to play eight or nine games if required.

"But I want to get the six games out of the way - early season is a great time to bowl.

"But, at the same time, Motty [Matthew Mott] has sat me down said, 'We'll work out which six games you're going to play in because we know which sort of wickets we want you to bowl on'.

"We've got a great group of fast bowlers now and they'll get rotated, which I think is healthy."

Management will be keen to see Jones recapture the form and hostility with which he kept batsmen on their toes when he was a key member of the England attack.

A little of the old Jones fire would help thaw things out at the Swalec.