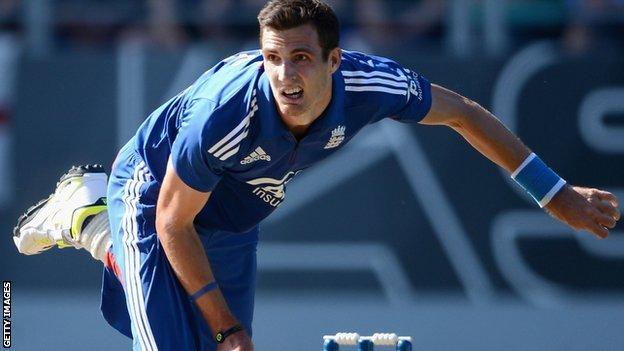 Steven Finn says he needs to improve as a bowler - despite winning an award for his England performances in the winter.

Finn, 24, won the FTI Most Valuable Player award after taking 37 wickets in all formats against India and New Zealand and during the World Twenty20.

"I would not say I've established myself in the England team yet; I'm still fighting to do that," he said.

"I still have a long way to go to be the bowler I want to be, but at the moment I'm happy with where I'm at."

The fast bowler added: "I was surprised to win the award as lots of lads put in big performances for England, but it's a great honour."

England won two and drew one of the four Tests in India, the first time they had won a series there since 1985, and then drew all three Tests against New Zealand.

After two home Tests against New Zealand in May, England host the one-day Champions Trophy tournament, before back-to-back Ashes series against Australia later this year.

Australia were recently beaten 4-0 in a Test series in India, but Finn believes England face a tough task to defeat their old rivals.

"To beat Australia is the ultimate," he told BBC Sport. "You look at Ashes series when you're growing up and you're glued to the television and want England to do well.

"The back-to-back Ashes series are something to be really excited about and we're feeling good as a team.

"The results over the last few years have given us that confidence, but it's important we don't look at it as an easy task by any means.

"Australia are still a world-class side and have world-class players capable of winning games of cricket.

"But it's important we start well against New Zealand and winning those Tests will put us in a good position for the rest of the summer."

He produced career-best international performances with the bat and ball against New Zealand as his score of 56, his maiden Test half-century, helped England draw the first Test in Dunedin, before he took 6-125 in the third Test in Auckland, his joint best bowling figures.

However, the 6ft 7in Middlesex seamer is keen to improve his game further.

"My consistency can still get better and I'm working on my skills in Test cricket," said Finn. "It's good to pick the brains of people like Jimmy Anderson, Stuart Broad and David Saker, the bowling coach, but you have got to get out there and do it on the pitch.

"I want to play a lot of Test cricket in the future. I've had a more important role over the last year, but I'm always looking to improve and I think I can get a lot better."