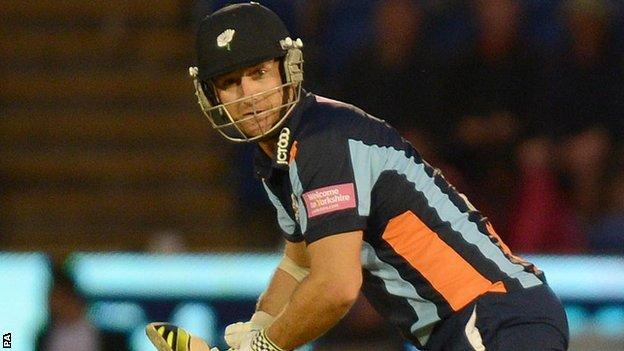 Yorkshire skipper Andrew Gale is keen for the county to build on last year's Twenty20 exploits and win the domestic competition this season.

The Headingley side were beaten by Hampshire in last year's final in their first ever appearance at finals day.

"It is a big jump up from Division Two , but Yorkshire have recruited well. The club will be pleased to see batsmen Joe Root, Jonny Bairstow, and Gary Ballance getting England recognition, but it is bittersweet given that it means they night not be available for parts of the season. Their absence will give Joe Sayers and Alex Lees a chance to stake a claim in the team and it will be interesting to see how they do. It would be wonderful if Yorkshire could win the title in their 150th year, but that is the stuff of fairytales really and, in reality, I think they will come third or fourth."

Gale told BBC Radio Leeds: "We want to keep developing that side of our game.

"We had a taste of it last year and we were bitterly disappointed to lose in the final. We want to go one better and win it this year."

The county played in the Champions League in South Africa in October but did not manage to progress beyond the group stage.

Meanwhile, Gale is confident that the squad will be able to cope without their England internationals.

Since the end of last season, batsman Joe Root has joined Jonny Bairstow and Tim Bresnan in the national set-up, while fellow batsman Gary Ballance has been named in the provisional 30-man squad for ICC Champions Trophy in June.

Gale added: "Alex Lees got a century while we were out in Barbados and showed great maturity.

"Obviously we'll miss Joe and Jonny, any team in the country would. But it provides an opportunity for someone else and maybe we have the next Joe Root in our youth set-up."

Jason Gillespie's side, who gained promotion back to Division One last season, face Sussex in their County Championship opener from Wednesday.