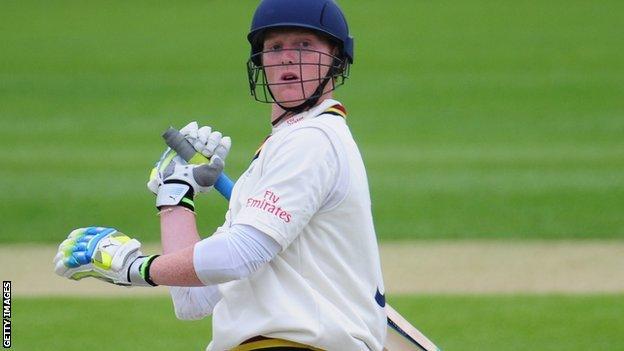 Ben Stokes led the Durham fightback against Somerset on the opening day of the new County Championship season at Chester-le-Street.

But Stokes, dropped by England Lions during the winter for disciplinary reasons, stopped the rot.

His 49, and Scott Borthwick's 45, took the hosts to 250 all out, as Kirby and Trego each ended with three wickets.

There was, though, perhaps less assistance than the pace bowlers might have expected, but still enough help to see five wickets fall for 63 runs after Durham had reached 31-0.

Kirby struck first, nipping one back to bowl Mark Stoneman and, after former Durham captains Will Smith and Dale Benkenstein managed only one run between them, Keaton Jennings shouldered arms to be bowled by Thomas.

With Paul Collingwood pinned lbw by Trego, it was left to Stokes to share 60 with Phil Mustard (30), only for both to be undone by the left-arm spin of George Dockrell.

Stokes offered one of three catches to Craig Kieswetter, given the wicketkeeper's gloves ahead of Jos Buttler.

Still, Borthwick offered further resistance before becoming last man out, bowled by Kirby for what proved to be the last action of the day.

"The umpires told the players they could wear beanie hats at the start of play, but they weren't allowed gloves (it is not in the rules) and everyone took advantage on a bitterly cold day.

"This was winter cricket, but it didn't rain and, even though Durham struggled with the bat in parts, there were tenacious knocks by Scott Borthwick and Ben Stokes.

"Every little helped and, although they were all out for 250, looking around the rest of the country, that wasn't a bad score and gives the bowlers something to work with on a soft track."

"Honours were just about even at the end of a chilly day of honest cricketing endeavour.

"Durham may be slightly the happier side with their 250 all out, especially after being 197-7, but the Somerset bowlers stuck to their task well.

"Stokes made Durham's best score, although Borthwick's 45, holding the tail together at the end, may yet prove crucial to the outcome."