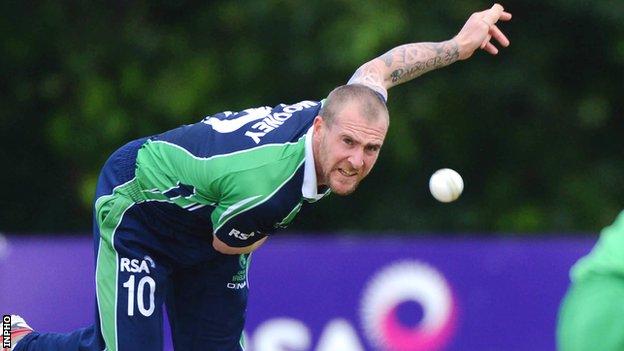 Ireland all-rounder John Mooney has apologised for a tweet in which he hoped Margaret Thatcher's death was "slow and painful".

"I would like to apologise to anyone that I upset with my tweets - I realise now that they were offensive to many and I have deleted them," he said.

Mooney may face disciplinary action by Cricket Ireland despite his apology.

Baroness Thatcher, the 87-year-old former prime minister, died on Monday after suffering a series of strokes.

"I'd like to assure my family, friends, employers and team-mates that I have learned a very valuable lesson and in future will stick to focusing on my game," added Mooney.

Deutrom, who welcomed Mooney's apology, explained that a clause in player contracts refers to public comments.

The 31-year-old, who plays for club side North County, won his first Ireland cap in 2001.

Mooney was in the Ireland squad at their first World Cup in 2007 and was named Ireland Player of the Year in 2010.

He hit the winning runs in Ireland's famous victory over England in the 2011 World Cup and was the team's leading wicket-taker in the tournament.