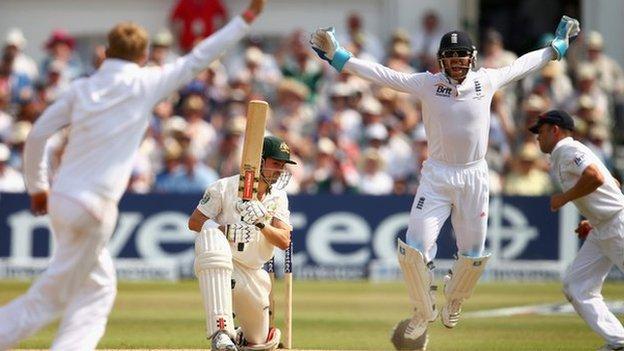 Nottinghamshire director of cricket Mick Newell says batsman Ed Cowan is used to dealing with uncertainty about his place in the Australia side and has backed him to deal with the pressure.

Cowan's place for Thursday's second Test at Lord's is in doubt after a poor first Test in which he scored 0 and 14.

Newell told BBC Radio Nottingham: "He still seems to be one of those players who is always under a bit of pressure.

I don't think batting at three makes much difference to him

"But he'll hope to be selected and make a better impact than in Nottingham."

Australia coach Darren Lehmann has criticised his top order and said he was disappointed with Cowan's shot selection at Trent Bridge, which saw him dismissed by part-time spinner Joe Root in the second innings.

"He's had a tough game," Lehmann said. "Like everyone, you've got to make runs and perform.

"We're trying to learn and get better. I'm sure he'll get better at that as well."

A dogged left-handed opener, Cowan arrived late to Test cricket but his 136 against South Africa at Brisbane last year underlined his quality. Has spent part of the 2013 summer playing county cricket with Nottinghamshire, scoring 478 first-class runs at an average of 43.

Newell, who signed Cowan for Notts during the first half of the county season, said: "He had a good tour of India but he will obviously be concerned. He is a player who has not been able to fully cement his place in the team.

"He is very hard working-working and determined player. He is proud of playing international cricket and he loves the four-day and five-day game.

"He is is very keen on the traditions of cricket so I think he would love to play. Representing his country at Lord's would be a great honour for him."

But Newell does not think Cowan will be affected by having to play at number three, rather than his more regular opening slot.

"I think that they made it fairly clear that Shane Watson would open," Newell added. "They have a lot of opening and top-order players; Phil Hughes has opened the batting and they have a number of players in the top order.

"I don't think batting at three makes much difference to him. I am sure he would have preferred to hold the spot he had done well in in India but at that at level you just want to play."