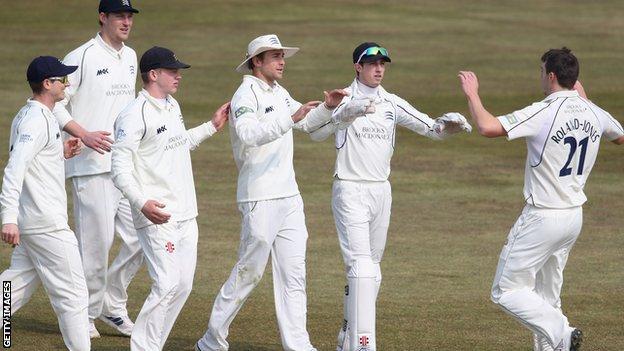 Half-centuries from James Taylor and Ed Cowan held up a Toby Roland-Jones-inspired Middlesex on a competitive first day at Trent Bridge.

Australia opener Cowan made 61 on his debut, but was third to fall as Roland-Jones tore through the Notts top order.

It left Taylor to add a 55 in nearly four hours at the crease, but Roland Jones's career-best 6-63 saw the home side bowled out for 278.

Middlesex survived two overs before the close to finish on 12-0.

"On his county debut, Ed Cowan gave a glimpse of the doggedness we may see in Australian colours later in the summer.

"The left-handed opener top-scored with 61, having begun the day with boundaries from the first three deliveries he faced.

"James Taylor compiled a patient half-century also but too many Notts batsmen got themselves out when set, particularly Riki Wessels, whose run-out was comically poor."

"A fascinating battle between bat and ball, with the pitch playing surprisingly well on the opening day of the season at Trent Bridge.

"Middlesex may have been a little concerned when the hosts reached 204-4 after tea. However, Toby Roland-Jones finished with a career-best haul, including the first four wickets to fall, and was the star throughout.

"Ed Cowan had got Nottinghamshire off to a flier with his half century, but will feel he have his wicket away softly, while James Taylor was as defiant as ever for his 50."