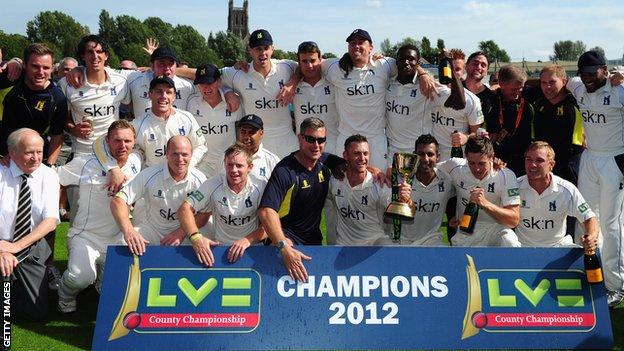 I'm looking forward to the county season starting on Wednesday and I'm expecting some exciting, high-quality cricket to be played throughout the summer.

County cricket is vitally important because it is the feeder to the England team. The competition is strong and competitive, meaning the national side reaps the benefits.

Geoff Miller and the other England selectors spend many hours watching county cricket, which allows them to assess a player's ability, technique, character and personality before selecting them for the next step up.

Nick Compton and Joe Root are fine examples of players who have graduated to the England team over the winter and their selections should motivate every county player with ambitions to play for their country.

Root, who is 22, has been earmarked as a player of great potential for a couple of years now and is developing very nicely. However, if you just looked at his statistics he didn't stand out as an automatic pick - yet the England selectors had seen something special in him while playing for Yorkshire and when he was with the various ECB performance squads.

Compton is at the other end of the scale - he is now 29 and had been playing county cricket for a number of years before eventually earning his Test selection through sheer weight of runs for Somerset.

To mark the first day of the new season, I'm going to look at some teams to watch in the County Championship and discuss some of the domestic game's star performers.

Who will win the ultimate prize?

Division One of the County Championship is always keenly contested and I expect it to be no different this summer.

I'm obviously hoping Surrey will win the Championship for the first time since 2002 but there will be plenty of challengers for the title.

"Congratulations to Steven Finn for winning England's FTI Most Valuable Player after taking 37 wickets in all formats against India, New Zealand and during the World Twenty20.

"However, while I fully agree he should be very happy with his progress, I was also delighted to hear him say he still has room to improve.

"He has the ability to be one of England's finest ever bowlers so I am pleased to see he has that desire to be the very best he can possibly be. He is certainly not shy of hard work and in Angus Fraser at Middlesex he has a fine role model."

They may have had a change of leadership during the winter, with Dougie Brown replacing the new England one-day coach Ashley Giles as director of cricket, but Brown knows the club from top to bottom and he will be working with a strong squad that has a lot of depth.

I'm also interested to see how Middlesex fare. They have signed James Harris from Glamorgan, an exciting young bowler on the fringes of the England squad, and they also have Toby Roland-Jones who took more than 60 wickets last season.

My only concern is whether they are capable of scoring enough runs. They tend to rely heavily on their overseas player, Chris Rogers, and there have already been whispers that he might be called up for Australia's Ashes squad. How would they cope if that happened?

Under Mick Newell, Nottinghamshire have built a very strong squad. They will lose Graeme Swann and Stuart Broad to England duties, but they will still be able to field quality players like Michael Lumb, Alex Hales, James Taylor and Samit Patel for most of the season.

Pitches at Trent Bridge tend to produce results too, meaning Notts are likely to be pushing to win the County Championship at the end of the summer.

Sussex and Durham will again be keen to show the top division exactly what they are capable of and both counties will believe they have a more than decent chance of success. They both know what it takes to win the Championship and that experience can count for a lot.

Derbyshire and Yorkshire are the new boys having been promoted and they will look to establish themselves, knowing that four or five wins will secure their status and, if achieved early enough, they can then begin to think about the top end of the table.

Division Two of the County Championship is always difficult to assess because it usually goes down to the wire.

"It's fantastic news that the BBC Sport website will be broadcasting live radio commentary of every single county match this summer.

"Many newspapers are cutting down on their coverage of county cricket and, with the Ashes series and the British Lions rugby tour of Australia dominating sport this summer, there is a danger that county cricket could lose much-needed exposure.

"But this is great for the game and allows supporters to follow their team's progress more closely."

In the first half of the season, some teams play quite cagey cricket to ensure they have stayed in with a chance of promotion come the end of the summer - when teams are more prepared to take a risk in pursuit of victories.

Lancashire, who won Division One in 2011, were relegated last year and I am struggling to see past them for promotion. They have kept most of that title-winning team together and all-rounder Wayne White is an astute signing from Leicestershire.

The square has been turned and the pitch re-laid at Old Trafford so Lancashire will need surfaces that allow them to force results - rather like the ones they played on at out grounds in 2011.

Another team to watch out for are Hampshire. They have an effective group of players and the signing of the Pakistan off-spinner Saeed Ajmal for the final two months of the season is a shrewd one.

He could come into the team and win matches almost single-handedly when the pitches should be at their driest later in the summer.

There are a number of clubs who are struggling financially and many of those are bringing through their own players rather than making new signings.

While you also need experience to help nurture that talent, I am pleased to see counties like Essex and Kent trying to build competitive teams with some very promising young players who have been developed through their youth and academy system.

Graeme Smith (Surrey) - To have the captain of the number one Test side in the world playing county cricket for the next three years can only be good news for Surrey and the county game.

Smith is a huge signing for my county, and the perfect person to lead the team both on and off the field after what has been a very difficult 12 months.

When his signing was announced, there was a lot of excitement in the county game and a real buzz in the Surrey dressing room.

It's a huge boost to our domestic game to see a world-class player like Smith playing county cricket. He will be able to pass on his vast knowledge and experience and players both young and old can learn so much from him.

In years gone by, the very best players in the world - Malcolm Marshall, Michael Holding, Viv Richards, Wasim Akram and the like - would come over here during the summer and add so much to the overall quality of the competition, but with today's busy international itinerary the availability of world-class players is limited.

I'm sure Smith will stamp his class on county cricket and, with my Surrey cap on, I hope he leads the club to plenty of success.

Glen Chapple (Lancashire) - Chappie is 39 now but his hunger and desire remain as strong as ever.

If I had to pick five players during my time who were unlucky not to have played Test cricket for England, he would certainly be one of them.

Chappie is a skilful bowler who has taken almost 900 first-class wickets, and he'll be desperate to help Lancashire get back into the top division of the Championship this summer.

Marcus Trescothick (Somerset) - The former England opener would still be playing international cricket if it weren't for the stress-related illness that forced his premature retirement from the national side.

He is the best batsman in the county game by a mile and his wicket is the most prized by bowlers now that Mark Ramprakash has retired.

He is a model professional and the impact he has on Somerset and their opponents is massive.

He is an inspiration to all young players, showing them exactly what a top Test-match player is all about.