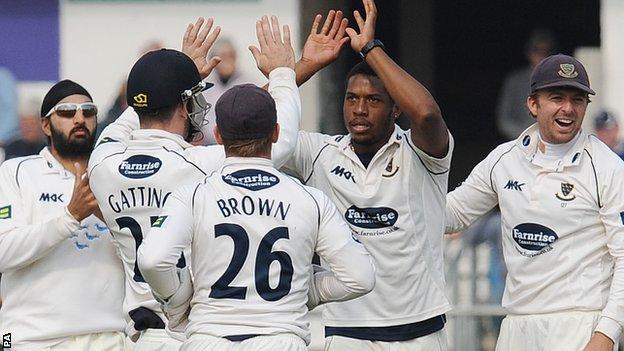 Chris Jordan made a sparkling debut for Sussex as they dominated the opening day of their County Championship game against promoted Yorkshire.

The ex-Surrey all-rounder took 6-48 as the hosts made just 96, their lowest total against Sussex at Headingley.

Ryan Sidebottom hit back with three wickets but an aggressive 80 by Chris Nash saw Sussex to 104-3 at the close.

However, being bowled out in less than 47 overs was hardly what the home side expected on their return to Division One, although the fact that they selected a side including four seamers was indicative of their thinking about the pitch.

England spinner Monty Panesar was only required to bowl two overs as Jordan, aided by James Anyon and Steve Magoffin, ran through the Yorkshire line-up to finish with career-best figures.

Having seen off Luke Wells and Michael Yardy with the new ball, Sidebottom struck a vital blow by ending Nash's 87-ball knock, the Sussex opener having given Yorkshire newcomer Jack Brooks plenty to think about as he conceded 26 from his first three overs for the White Rose.