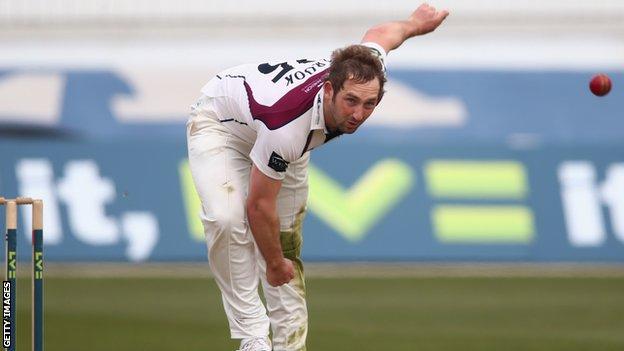 Northants skittled out Glamorgan for just 134 in 50 overs on day one of their opening County Championship game.

Seamer Steven Crook, who re-signed from Middlesex this winter after two seasons away, led the way with 4-30.

In reply, Glamorgan briefly rallied when Michael Reed dismissed David Sales and Alex Wakely in consecutive balls to reduce the visitors to 58-3.

But Northants recovered to reach 108-3 when rain stopped play early, with captain Stephen Peters 60 not out.

"Day one could not have gone better for the visitors, who won fewer games than anyone last season.

"Stephen Peters winning the toss helped a big deal, but his bowlers backed him up with largely disciplined, accurate bowling.

"Glamorgan did not help themselves and Peters showed them how to play the pitch.

"He was determined to stamp his authority on the game before play was brought to an early halt - and a lead of 60-100 could be significant on this pitch, though it is expected to get better as the game goes on."