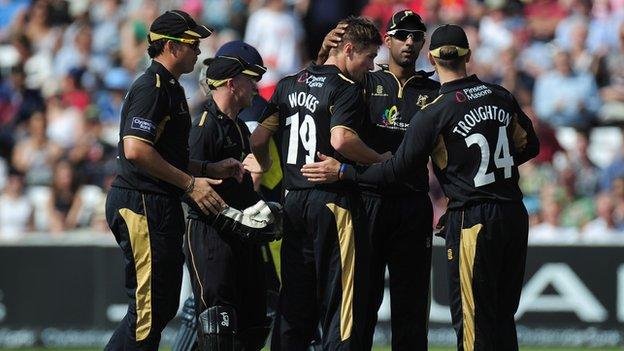 County champions Warwickshire will start the defence of their title against Derbyshire on Wednesday without three of their England contingent.

The England and Wales Cricket Board had already decreed that Ian Bell and Jonathan Trott can play in only two Championship games ahead of the first Test with New Zealand on 16 May.

But they also asked for Chris Woakes to be rested for the Derbyshire game.

Milnes goes into the game in fine form after taking match figures of 9-94 to help the Bears beat Oxford MCCU last week.

Hannon-Dalby took six wickets against the students in The Parks, on top of his five-wicket haul on his Bears debut against the MCC in Abu Dhabi the week before.

After drawing their last two four-day games last season, the Bears will be seeking their first Championship win at Edgbaston since beating Worcestershire last August.

"We're keen to keep marching on," said Bears coach Dougie Brown, in charge of the team for the first time since finally being chosen to succeed England's new one-day supremo Ashley Giles in January.

"But we don't think just because we won the championship last year, that's it. We have to keep evolving. If we don't, we'll be going backwards.

"We've worked hard all winter and we've addressed a few different areas that we thought could have been slightly better."

Warwickshire will be up against a newly-promoted Derbyshire side containing former Bears wicket-keeper Richard Johnson, who completed his move to the East Midlands at the end of last season.