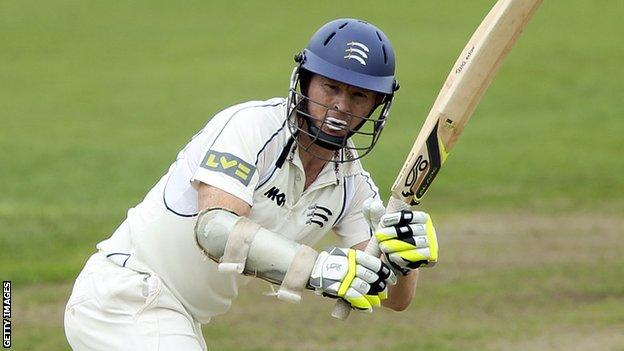 Australia national selector John Inverarity says the batsman, whose sole Test cap came in 2008, "will be in discussions" ahead of the Ashes.

"It's something I have wanted to be a part of for a long time. To get another opportunity would be fantastic."

There are only five established Test batsmen in Australia's list of centrally contracted players for 2013-14, with Inverarity saying the country "do not have the batting depth now that we enjoyed seven or eight and 15 years ago."

I have never really had the chance to see how good I could be at that level. To get that opportunity would be exceptionally satisfying

Australia visit England this summer as the hosts look to defend the Ashes.

Rogers has scored almost 19,000 first-class runs at an average of 49.90 and last season he passed the 1,000-run mark for the sixth time in his career in England.

The Sydney-born left-hander, whose only Test appearance came in the defeat to India in Perth, is keen to land another opportunity to prove himself on the international stage.

"The pinnacle of any person's cricket career is to play for your country," Rogers added.

"I have never really had the chance to see how good I could be at that level.

"That is one of the few things I have left in my career. To get that opportunity would be exceptionally satisfying.

"Looking back, my career has been consistent and good for a long time.

"I have done well at this level but to go up to the next level would be another challenge and something I'd ideally like to find out.

"To play in the Ashes, especially with the last two Ashes series played in England being so exciting, would be fantastic to be part of the group. But I will just wait for that call."

Meanwhile, Rogers, who will captain Middlesex in the County Championship this season, is hoping the Lord's outfit can build on last season's third-placed finish in Division One.

"We've been lucky enough with our preparations and have had plenty of time outdoors," he said.

"I am really excited. I think the last two years I have played for Middlesex have been two of the more enjoyable seasons I've played in cricket.

"April batting in England is always challenging but that's what you come up against. We are doing a lot of good things.

"It is another year with guys who have with experience under their belts so I expect a few of the batters to improve their statistics.

"I think I have a good feel for the four-day game and can really lead from the front with my experience."