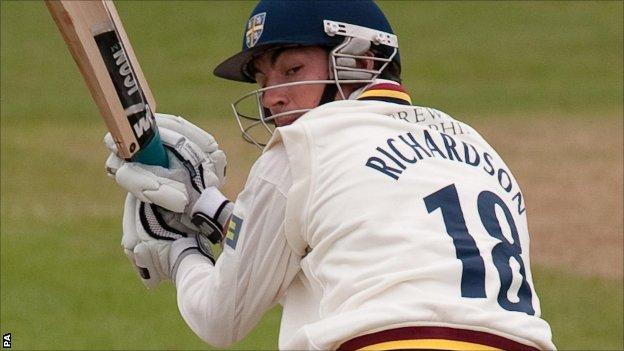 While some of his peers were sunning themselves on various beaches, or extending their seasons in the southern hemisphere, Durham's Michael Richardson swapped cricket whites for shirt and tie this winter.

The 26-year-old South African, a Finance, Accounting and Management graduate from Nottingham University, worked for Durham's sponsors Brewin Dolphin throughout the winter - something of a departure from his usual post-season routine.

"In the past I got a bit of stick from my missus because I used to tell her I was going to Cape Town for cricket, but when she would phone I would be on Clifton beach because there is much more spare time," Richardson told BBC North East and Cumbria Sport.

Richardson is not alone in preparing himself for a life after sport. The Professional Cricketers Association has a 'Personal Development' scheme engineered to provide players with advice and help on what to do when they retire.

"It's boring stuff but if it puts money on the table when I finish cricket then I'm happy with that," Jennings told BBC Sport.

"It takes one turn of the ankle and that's the career over, that is the reality of professional sport.

"The earlier you can get the degree done and get something behind you the better."

"It's been different this time. Coming into the gym after work is more of a grind, but it's refreshed my mind.

"I'm not ready to do a 'nine-five' yet, and I've found my cricket is a lot more enjoyable as a result."

It was a tough transition for Richardson - swapping the sun, sea and sand for the formality of an office role - particularly with the pressure of maintaining his fitness for cricket.

"At first I was a little bit blurred," Richardson continued. "I was worried about it [work] taking up too much time and getting in the way of my cricket development.

"But I had quite a constructive meeting with [head coach] Geoff Cook and [strength and conditioning coach] Mike King - Geoff from the cricket and life side, and Mike from the physical.

"Mike said I wasn't making quite enough improvement as the guys who trained and pushed themselves. I was coming in after work, doing my hours in the gym and leaving without feeling like doing it or putting in the extra yards.

"Geoff and Mike were happy with my cricket, I was making strides but I needed to make decisions now that will benefit cricket in the long-run.

With his youthful looks and easy-going manner the former MCC young cricketer was a popular figure with the company during his five-month stint.

However, clients and seminars have again given way to the crack of leather on willow as he rejoined his county colleagues for the start of the current campaign.

Geoff and Mike were happy with my cricket, I was making strides but I needed to make decisions now that will benefit cricket in the long-run

That deal came on the back of important knocks toward the end of the campaign, notably against Sussex, that helped the club avoid relegation from Division One.

Those appearances saw the wicketkeeper-batsman drop his gloves to concentrate on batting duties, with the good form of regular keeper Phil Mustard leaving him a largely frustrated figure.

Richardson now remains guarded on what hopes he has for the forthcoming campaign, which gets underway against Somerset on Wednesday.

"I've got to take it game by game, phase by phase," he said.

"I've got my own goals which I keep to my chest - why should I put myself out there for me to fall?

"I'm waiting to see what Durham's views of me are first, but I kind of know what I want to achieve.

"A couple of guys will be retiring over the next couple of years, we're a team in transition, so we'll see how things come out."