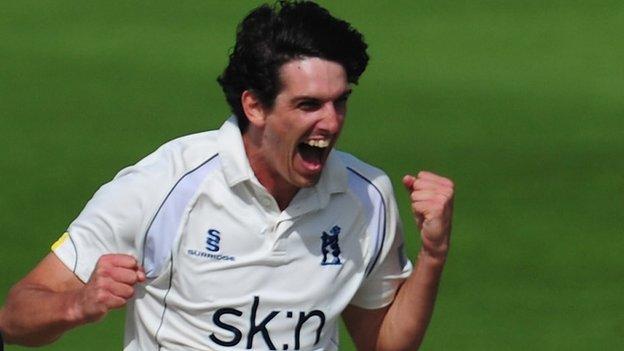 Warwickshire have signed England Lions paceman Chris Wright on a new-four-year contract which ties him to Edgbaston until the end of the 2016 season.

The 27-year-old ex-Middlesex and Essex fast bowler has been a huge hit since arriving at Edgbaston, initially on loan, from Chelmsford in August 2011.

He credits Bears bowling coach Graeme Welch as the key to his success.

But Wright, whose existing contract was due to expire at the end of this season, insists that it is not any change of action which has paid dividends - more the inspiring effect that highly-acclaimed former Bears medium pacer Welch has had on his mental outlook.

"It's more a mental emphasis. I'm not talking about really funky sports science, it's just playing to the right game plan, doing the right things and being confident.

"The environment here is fantastic with a great coaching team that's helping the players reach their potential. There is such an expectation to win games.

"It's a massive club. You feel like you're playing for the Manchester United of cricket.

"Working day to day with Graeme Welch has helped me become a stronger, faster and a smarter bowler."

Playing only his 22nd first-class game for the Bears on Wednesday, Wright claimed another three scalps against Derbyshire on the first day of the new County Championship season to reach 100 wickets for Warwickshire.

That came in front of England national selector Geoff Miller, on the day he was also awarded his county cap.

Chris Wright's journey to becoming an England Lions opening bowler in 18 months proves what can be realised with talent, hard work and dedication

And, having last week been included in England's provisional 30-man Champions Trophy squad, on the back of his winter Lions call-up in Australia, and taking a match haul of 8-110 against the MCC in Abu Dhabi, Wright's international career has truly taken off.

"Chris has been an instant success here at Edgbaston," said new Bears director of cricket Dougie Brown. "He formed a potent new ball attack with Keith Barker last season, winning recognition as one of the leading fast bowlers on the county circuit.

"His standards in training set a great example to the younger members of the squad.

"His journey to becoming an England Lions opening bowler in 18 months proves exactly what can be realised with talent, hard work and dedication."